Home » Medical Authority » Spotting Medical Malpractice in a Hospital: – A Doctor’s Story of a Mistaken “Do Not Resuscitate Order” and How It Caused His Grandmother’s Death

It was March of 1983, and I was a new doctor completing a one-year Transitional Internship at Framingham Union Hospital in Framingham, Massachusetts in preparation for starting my residency training in Ophthalmology the following July.  I received a call informing me that my favorite Grandmother, Rose, had taken sick and had been admitted to a major New York Hospital but was doing well and was to be going home soon. Since I had the weekend off, I decided to fly down to New York City so that I could visit her before she was discharged home. 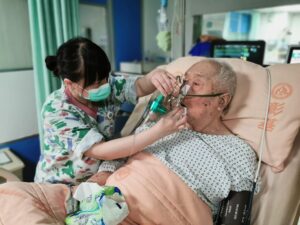 How to spot medical malpractice in a hospital.

I Flew from Boston to LaGuardia Airport and was picked up from the airport by my mother who then drove us into New York City to the Hospital. As my mother parked the car, I took an elevator up to the floor where my Grandmother had been admitted.

As I entered my Grandmother’s hospital room, I called out to her saying “Hi Grandma. How are you doing” but there was no reply. She seemed to be sleeping in the bed but didn’t respond to my greeting and wasn’t moving at all. As I came closer to her bed, I saw that she was slumped in the bed and didn’t appear to be breathing.

I tried to gently shake her to try to arouse her but there was no response. She wasn’t breathing and I felt for her carotid pulse but felt none.

As a trained doctor, I knew at this point that she had suffered some type of cardiopulmonary arrest and needed to be immediately resuscitated. I ran into the hallway right outside of her room and told a passing nurse “I’m a doctor, my Grandmother isn’t breathing. Call a code, now.”

The nurse ran to the nurse’s station, grabbed a phone and I heard a “code blue” called for my Grandmother’s room number.  Suddenly, there was a flurry of activity as doctors and nurses began running into the room and a “crash cart” was rushed in.

As they began CPR, prepared the intubation and breathing equipment and began hooking my grandmother up to an EKG monitor and were getting all the necessary cardiac drugs ready to try to re-start her heart, I hear someone announce loudly to “call the code. She’s DNR.”

I turned to see who was speaking and a saw a young, bearded male doctor wearing a short white coat who was holding a piece of paper that he was referring to. I knew he looked familiar and then realized that he was someone I knew.

He then showed me the “on-call” sheet which had the name of all the patients on the hospital floor. My Grandmother’s name had a large, red circle around it. He told me, “this means she’s a Do not Resuscitate patient.”

I told him, “please listen to me. You know me. You’ve got to save her” but he did nothing and the code blue was ended.

By this time with no life-saving treatment rendered, my Grandmother was dead. The intern showed me and then gave me a copy of the on-call sheet for interns and residents that is passed on from one intern to another as on-call shifts change. I was totally devastated. My dearest grandmother’s life was over due to a mistake on the part of admitting physician and the intern and his supervising resident. It was a “mistake that should have never happened.”

It was “cut and dry.” This was pure negligence on the part of the covering attending physician who had admitted her who had not specified her DNR status because at that time it wasn’t absolutely required. It was also due to negligence on the part of the admitting intern and resident who just assumed that because she was 87 years old that she was a DNR patient, to the Hospital who wasn’t properly supervising them.

Read on to learn more about Cardiopulmonary arrest, Cardio-pulmonary resuscitation and how to protect yourself and your family members and relatives when admitted to a hospital. A Mistaken “Do Not Resuscitate Order”

Cardio-pulmonary arrest Cardiopulmonary Arrest In Adults – StatPearls – NCBI Bookshelf (nih.gov) refers to the stoppage of normal heart and lung function which will result in death if not treated and reversed. The most common cause of cardiopulmonary arrest is some pathological event in the heart which causes the heart to stop.  According to the Centers for Disease Control (CDC), “75% of cardiac arrests are believed to be due to coronary artery disease.”

Cardio-pulmonary resuscitation in a hospitalized patient consists of chest compressions to resume the heart’s circulation to the heart and brain, intravenous access for the administration of heart stimulating drugs, ventilation of the patient through an airway or intubation and cardioversion of abnormal heart rhythms like Ventricular Fibrillation using a defibrillator. Take a look at the YouTube video above which describes what should have happened if the code blue emergency resuscitation effort had to try to save my grandmother’s life had continued.

What is a Do Not Resuscitate Order?

A Do Not Resuscitate (DNR) Order DNR and Medical Orders for Life- Sustaining Treatment (MOLST) (ny.gov), is a legally binding physician’s order made by your attending doctor’s order that is placed in your medical chart. It indicates your decision to not have any efforts made to restart your heart or restore your breathing if your suffer either a cardiac or a respiratory arrest.

DNR orders are usually reserved for those patients who are either suffering from terminal conditions like cancer or other incurable diseases who are of an age where they do not want extensive measures taken if they become deathly ill.

You should make sure that you and your relative’s doctor are fully aware of the degree of resuscitative efforts that your loved one desires.

To avoid a potential disastrous and deadly situation like a mistaken DNR order, when you or a relative or family member are admitted to a hospital for any reason, it is imperative that you have a full understanding of what a DNR order is and what your rights are as a patient in a hospital. To accomplish this, you should make sure to have the following documents completed before your loved one enters the hospital so that you are fully aware of your loved one’s DNR status: Meet the Author Doctor James D. Okun
James D. Okun, MD is a Phi Beta Kappa graduate of Duke University and of the Albert Einstein College of Medicine in the Bronx, New York. Dr. Okun has previously practiced Family and Emergency and Occupational Medicine and is the author of 3 books including Erasing Scars: Herpes and Healing, A New Holistic Approach to Herpes and The History of New Innovations in Modern Medicine.