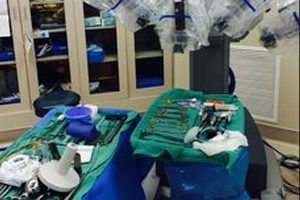 Medical Device May Have Given Lung Infection. Johns Hopkins Hospital is alerting 415 patients and their families that a defective medical instrument may have given them a potentially life-threatening lung infection, a newspaper reported.

Some patients who were examined by one of three contaminated bronchoscopes have died, but hospital officials told The (Baltimore) Sun they did not know if they died from the bacteria or from their existing illnesses.

The officials told the paper they have not determined how many patients have been infected or died.

The Centers for Disease Control and Prevention and the Food and Drug Administration are investigating the problem, in part to determine if the device has triggered outbreaks elsewhere, The Sun reported.

“We’re aware of this situation and we’re looking into it,” FDA spokesman Lawrence Bachorik told The Associated Press on Sunday.

A call to a CDC spokesman was not returned Sunday.

Most of those treated at Johns Hopkins were suffering from cystic fibrosis, AIDS, or lung cancer, or had recently had lung transplants.

Hospital officials discovered the problem after realizing that 128 patients had been infected with a bacterium known as pseudomonas. The number was two to three times higher than the hospital would expect, said Dr. Paul J. Scheel Jr., vice chairman of medicine.

What Cause The Patient Deaths?

“We don’t know the cause and effect between patients who died and this infection,” Scheel said. “People are going through medical charts to try to ascertain this.”

Scheel said at least one other hospital had reported problems with the instrument, but he did not know the name of the hospital.

The Maryland Department of Health and Mental Hygiene and Baltimore City Health Department were trying to determine if the problem exists in other local hospitals.

The bronchoscopes are made by Olympus America, which recalled some of them last November. Hopkins owns four of the defective instruments, but only three were found to be contaminated.

The recall letter to Hopkins, dated Nov. 30, wasn’t immediately acted on because it was mistakenly addressed to the loading dock of the Hopkins physiology department, the paper said.

Officials at Olympus did not return a phone message seeking comment Sunday.

In recall letters, Olympus described the defective instruments as having a loose valve that trapped bacteria.

Physicians use the instruments to perform bronchoscopies, which inspect a patient’s lungs and take tissue samples. A thin, tube-like instrument, about the width of a pencil, is placed through the nose or mouth and into the lungs.

The tube has a tiny camera at the tip and uses fiber-optic technology to produce pictures of airways.