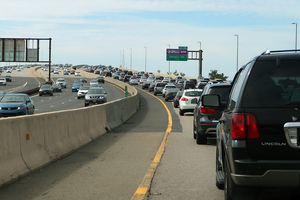 ABERDEEN TOWNSHIP, N.J. — A 35-year-old man who lived in Monmouth County who was involved in a tragic three-car crash on April 27, 2019, has tragically passed away from his injuries. The person who died was from Hazlet according to New Jersey.com. New Jersey.com reported near the time of the accident that six adults and three children were hurt in the crash. The aftermath of the accident, the subsequent rescue efforts, and police investigation forced the closure of the Garden State Parkway. The road closure heavily impacted traffic and caused significant delays.

The reports from the accident indicate that the driver who died was headed south on the Garden State Parkway around 11:00 a.m. The New Jersey State Police said that the 2006 Jeep Cherokee went off of the left-hand side of the road around exit 120, into, and then across the grass median area. The out of control car struck a 2014 Honda Pilot going north on the Parkway. The collision demolished the two vehicles. Debris from the wreck struck another vehicle passing through the debris field.

The driver of the 2006 Jeep Cherokee that crossed into oncoming traffic was severely hurt in the crash. A med-flight helicopter transported him to a trauma center. The 42-year-old passenger of that vehicle sustained severe injuries. The driver of the northbound SUV hit by the southbound car was hurt. State Police said he is a 59-year-old man from Union Beach. He, too, had severe injuries. Six children were riding in the northbound SUV also, and they suffered minor, non-life-threatening injuries. The children hailed from Brooklyn and ranged in age from seven to 16 years of age. The driver of the Honda Accord that was hit by flying debris did not suffer any injuries.

New Jersey State Police began an investigation into the cause of the crash that shut down the Garden State Parkway for three hours. They have not released the results of their investigation.