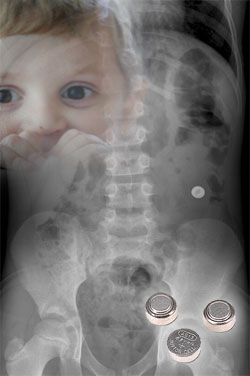 The number of emergency room visits made by children because of swallowed batteries has doubled in the past two decades, according to a report published in the journal, Pediatrics. The authors of the report blame the spike in battery injuries on so-called “button batteries,” the lithium batteries that are used in children’s toys, remote controls, and many other household gadgets.

The authors of the Pediatrics study sampled about 100 U.S. hospitals with 24-hour emergency rooms, according to a report from Reuters. They calculated that more than 65,000 kids under age 18 had a battery-related emergency room visit between 1990 and 2009. During the 20-year time frame covered by the study, the rate of battery-related visits jumped by four kids for every 100,000 U.S. children each year, to between seven and eight per 100,000. More than three-quarters of the children were ages 5 and under, and almost two-thirds were boys.

The vast majority of the emergency room visits seen in the study were the result of button batteries. According to the study authors, swallowing a button battery is particularly dangerous. If one lodges in the esophagus for more than two hours, the battery can start an electric current that burns through the tissue. This can lead to “damage to the laryngeal nerve and vocal cords, and bleeding fistulas,” the researches wrote. Burns can also occur if a child pushes a button battery into their ear or nose, leading to hearing loss or breathing problems.

While 92 percent of battery cases are successfully treated, the report said the remainder face an ever-increasing risk for severe internal damage.

“For parents, the message is that if they suspect that their child has swallowed a battery they need to get to the ER right away,” lead author Dr. Gary A. Smith, director of the Center for Injury Research and Policy at Nationwide Children’s Hospital in Columbus, Ohio, told HealthDay News. “And in terms of prevention, they need to store and dispose of batteries out of reach, and also tape all battery compartments shut.”

The most hazardous type were 20-mm lithium batteries, “which do not contain an alkaline electrolyte and generate more current because they have twice the voltage and higher capacitance compared with other button batteries,” the study said.

According to the author of the Pediatrics report, parents and caregivers should ensure that battery compartments on electronic games and toys, remote controls, watches, hearing aids and other household devices are taped. They also suggested that manufacturers should consider child-proofing battery compartments.

“Primary prevention of battery exposures is critical because of the limited effectiveness of medical interventions once tissue damage has occurred,” they wrote.