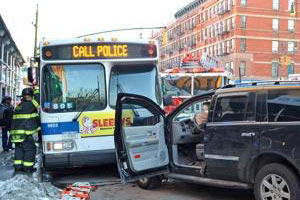 Police are investigating an accident in Brooklyn on Wednesday afternoon that injured 23 people, three of them critically, when a car was knocked into the path of an MTA bus.

The accident occurred at 3:55 p.m. on Wednesday at Utica Ave. and Clarendon Rd. in East Flatbush, the New York Daily News reports. A BMW heading southbound on Utica Ave. struck a Nissan Altima coming out of a parking lot, officials said, and the collision  pushed the BMW into the path of an oncoming B46 bus, police said.

The BMW crashed into the driver’s side corner of the bus and the front end of the car crumpled in the crash. Four men in the BMW were rushed to Kings County Hospital. Three of the men were listed in critical condition, according to the Daily News. A woman in the Nissan Altima was also taken to Kings County Hospital with non-life threatening injuries. The bus driver was hospitalized with minor injuries, and 16 bus passengers were treated at the scene.