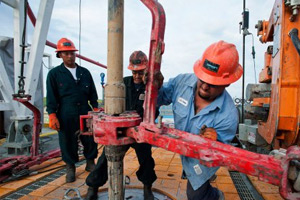 For many of the 100,000-plus workers in oil and gas exploration jobs, the Texas drilling boom has left a toll of death and devastating injuries.

The Chronicle analyzed 18,000 injury and illness claims and reviewed Occupational Safety and Health Administration (OSHA) data and public records on hundreds of oil field accidents since 2007. The Chronicle found that the federal government has failed to implement safety standards and procedures for onshore oil and gas drilling, despite promises of stricter standards made in 1992 in response to a series of devastating accidents at refineries and chemical plants. Though OSHA officials promised a “separate standard” to fit the “uniqueness” of the industry, the promise stalled when presidential administrations changed and has not advanced since.

Under existing regulations, OSHA is required to investigate only when an accident  kills workers or send three or more workers to the hospital, meaning that OSHA investigated only about 150 of 18,000 work-related injuries and illnesses in Texas in the last six years. Seventh-eight percent percent of these investigations uncovered safety violations and OSHA concluded that safer procedures and equipment could have prevented many of the accidents, according to the Chronicle. The U.S. Chemical Safety and Hazard Investigation Board, a government agency that investigates industrial disasters, has described onshore oil fields as among America’s most dangerous workplaces.

R. Dean Wingo, a recently retired OSHA administrator, says “a lot of outdated equipment is still being used … and OSHA doesn’t have any regulations specific to oil and gas at all.” There are only 95 OSHA inspectors to oversee all Texas work sites and few of them have oil- and gas-related experience or training. The Chronicle investigation further revealed that the youngest and least experienced workers often get the most dangerous jobs, and Texas law does not guarantee workers’ compensation for injured workers.

Further hampering safety efforts, OSHA inspectors cannot shut down a drilling rig or a well site. The Texas Railroad Commission, which monitors oil field fires and blowouts, can shut down operations, but it doesn’t coordinate with OSHA, and worker safety is not part its mission, a spokeswoman said.