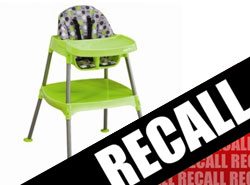 About 35,000 Evenflo Convertible High Chairs have been recalled and have been linked to a number of reports. The defective high chairs were manufactured in China; distributed by Evenflo Inc., of Miamisburg, Ohio; and sold at Toys “R” Us and Walmart stores, nationwide, and online at Walmart.com and Wayfair.com. The high chairs, which sold between December 2011 and June 2012,  retailed for about $40.

The activity tray on the recalled high chair can unexpectedly detach and allow an unrestrained child to fall, posing a risk of injury to the child. To date, Evenflo has received 18 reports of trays that detached, including eight reports of children who fell from the high chair and sustained bumps and bruises.

This recall involves Evenflo high chairs that convert from a high chair to a toddler-size table and chair. The Evenflo Convertible High Chair can be identified by the following model names and numbers; model numbers are located on a label on the lower portion of one of the high chair’s legs:

The firm advises customers in possession of the defective Evenflo Convertible High Chairs to immediately contact Evenflo for a replacement tray with installation and use instructions. Evenflo can be reached, toll-free, at 1.800.233.5921 between 8:00 a.m. and  5:00 p.m., Eastern Time (ET), Monday through Friday, or at the firm’s website at http://safety.evenflo.com.

In late 2010, we wrote that in less than two years, Evenflo Co. Inc. issued eight product recalls, surpassing any other manufacturer regulated by the CPSC at that time. The recalls involved over two million cribs, high chairs, activity centers, wooden gates, and telephone toys and were associated with at 187 reported injuries. No deaths were associated with the recalls.

At the time, the Commission was in settlement negotiations with Evenflo, according to a previous report by Dayton Daily News, citing documents it obtained. In all, Evenflo recalled and incredible 2,078,660 products.

Also that year, we wrote that Kids In Danger announced that 2009 saw the most nursery product recalls in history, issuing its annual study, “The Year of the Nursery Product Recall,” in which it discussed the problem. The report was released in collaboration with U.S. Representative Jan Schakowsky (IL-9) and Illinois Attorney General Lisa Madigan. Evenflo was noted as being one of the manufacturers that had multiple, separate recalls, with its Envision High Chairs responsible for 54 injuries before a recall was finally implemented.