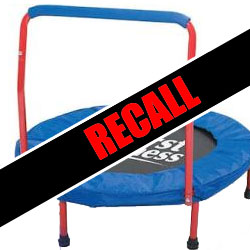 First Fitness Trampolines with Handlebars that were sold at Toys R Us are being recalled for fall hazard, the U.S. Consumer Product Safety Commission (CPSC) just announced.

About 40,000 First Fitness Trampolines with Handlebars, which were manufactured in China by Aqua-Leisure Industries Inc., of Avon, Massachusetts and sold exclusively at Toys “R” Us stores, nationwide, from September 2010 through April 2012 are being recalled. The defective trampolines sold for between $45 and $70.

Metal fatigue can cause the handlebar to break away during use, which poses a risk of laceration from exposed metal surfaces or other injury from a fall. To date, Aqua-Leisure received four reports of handlebars breaking from the metal connection joint during use. No injuries have been reported.

This recall involves First Fitness Kid’s First Trampolines With Handlebars, which are child-size toy trampolines constructed with a red and blue metal handlebar, a blue nylon deck guard, and a black jumping deck. The words “First Fitness” are embossed, in white letters, on the jumping deck. The recalled trampolines can be identified by model number FF-6902TR and Toys R Us SKN 491463. Model and store numbers are located on the lower right corner of the back of the packaging. A sewn-in tag on the bottom of the deck lists the factory date code of five numbers followed by the letters “GLTX.”

The firm advises consumers to immediately take the recalled First Fitness Kid’s First Trampolines With Handlebars away from children and contact Aqua-Leisure’s recall hotline for a full refund. Aqua-Leisure can be reached, toll-free, at 1.888.912.7087 between 8:00 a.m. and 5:00 p.m., Eastern Time (ET), Monday through Friday, or at the firm’s website at www.aqualeisure.com.

This is the second time this month we’ve written about trampoline recalls. The prior recall involved 92,000 Walmart Trampolines over for fall hazard. The Sportspower BouncePro 14′ Trampolines are surrounded by netting that can break, allowing children to fall through the netting and suffer injuries. As of the date of the recall, Sportspower had received 17 reports of the net breaking and 11 reports of injuries, including broken bones, back and neck injuries, and contusions.