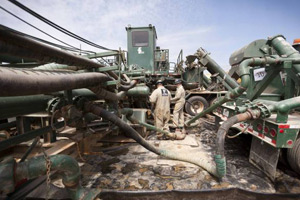 Hydraulic fracturing, or fracking, is a topic that has led to many health and environmental concerns. As the number of drilling sites continue rise, residents find themselves surrounded by a sea of chemicals and little regulations to protect them, according to InsideClimate News. InsideClimate News reports that in the Eagle Ford Shale play region of Texas, one of the most active drilling sites in the country, the issue of air pollution associated with fracking has left residents with a toxic cloud above their heads.

Over 7,000 oil and gas wells have been drilled in the Eagle Ford since 2008, and 5,500 more have been approved by state regulators. InsideClimate tracks the story of several people, including 58-year old Lynn Buehring. Buehring has more than 50 wells drilled within 2.5 miles of the home she shares with her husband. Since the fracking began her asthma has gotten worse; whereas before she needed a breathing machine once or twice a month she now uses it several times a week. She also suffers from intense migraines that have led to temporary blindness and almost caused her to lose consciousness. Buehring and her husband Shelby can’t even spend the day outside on their deck because of the fumes.

The Buehrings aren’t alone in their situation. In fact, people living near any fracking site, whether it be in Eagle Ford or Pennsylvania’s Marcellus Shale region, tend to report the same symptoms; this includes nausea, nosebleeds, headaches, body rashes and respiratory problems. Public health experts say that this is a strong sign for stricter air monitoring.

“If you have pockets of communities with the same symptoms downwind of similar sources, then there is a body of evidence,” said Isobel Simpson, an atmospheric scientist at the University of California, Irvine.

Fracking uses numerous hazardous chemicals to extract gas and oil, including volatile organic compounds such as the carcinogen benzene, sulfur dioxide and particulate matter. VOCs can also mix other chemicals in released from equipment in the field to create a respiratory hazard. Studies show that these chemicals can cause a range of issues, from headaches to neurological problems and cancer.

People living in the Eagle Ford have to also worry about hydrogen sulfide (H2S) a deadly gas, used in the extraction process. At only a few parts per million or less, H2S agitate asthma and cause nausea, headaches and eye irritation. At about 100 parts per million it starts to asphyxiate and at 1,000 ppm it kills within minutes. Data submitted to the Railroad Commission shows that in Karnes County, there are especially high levels of H2S; in Person field the average concentration is 16,399 ppm, which is sixteen times the lethal dose. In Panna Maria field the average concentration is 24,408 ppm. H2S and other chemicals used in fracking are known to be dangerous, so much so that the federal government has special safety regulations for workers who are exposed to them, but no equivalent measures have been implemented to protect people living near the drill sites.

InsideClimate News reports that the regulatory system is more helpful to industry than it is for residents. There are many gaps in oversight, and a lack of air monitoring. Companies rarely face fines and state legislators often have financial ties to the industry. There are only 5 permanent air monitors in the 20,000 square-mile region of the Eagle Ford, and these are all located far from where the heavy drilling takes place.  Oil and gas facilities in Texas audit emissions themselves without reporting it to the state. The Texas Commission on Environmental Quality (TCEQ), the agency that regulates most air emissions, has faced heavy budget cuts since drilling began and isn’t even aware that some facilities exist. Because of these reasons and many more, people like Buehring live in a toxic cloud with no end in sight.