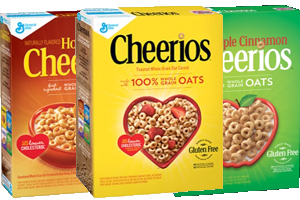 General Mills is voluntarily recalling about 1.8 million boxes of gluten-free original and Honey Nut Cheerios because of the possible presence of wheat.

Jim Murphy, senior vice president of General Mills’ cereal division, said he was “embarrassed and truly sorry” for an incident that allowed wheat flour to be introduced into the gluten-free oat flour system at a production facility in Lodi, California, the Washington Post reports.

The “undeclared allergen” could cause adverse health consequences for those with wheat allergies, celiac disease or gluten intolerance. Such people should not consume the recalled products, the company said in a statement.

General Mills said it will remove affected boxes from store shelves and warehouses. Customers with affected products can contact General Mills for a replacement or refund.

“Our Lodi production facility lost rail service for a time and our gluten-free oat flour was being off-loaded from rail cars to trucks for delivery to our facility on the dates in question,” Jim Murphy said. “In an isolated incident involving purely human error, wheat flour was inadvertently introduced into our gluten-free oat flour system at Lodi.”

For those with celiac disease, the body’s immune system reacts to gluten—a form of protein found in some grains—and causes damage to the intestine, making it difficult for the body to absorb nutrients, especially fat, calcium, iron, and folate, WebMD explains.

Celiac symptoms include abdominal bloating and pain, chronic diarrhea, vomiting, fatigue, and weight loss. Children may show signs of malnourishment and may experience growth problems. Teenagers may experience delayed puberty in addition to the other symptoms. Adults with celiac disease may develop osteoporosis because the body cannot absorb sufficient calcium, and women may experience infertility and miscarriages.

One in 133 Americans has celiac disease and needs to follow a gluten-free diet to control symptoms. To serve the gluten-free market, General Mills announced earlier this year that it would retool its facilities so that five varieties of Cheerios would be gluten-free. General Mills say products produced at the Lodi plant on other dates are safe for those with gluten allergies to consume.

A number of recent posts on the Celiac Disease Foundation’s Facebook page are from parents of children with celiac disease who became sick after eating the supposedly gluten-free Cheerios, the Washington Post reports. Murphy, the General Mills executive, said, “We sincerely apologize to the gluten-free community and to anyone who may have been impacted.”