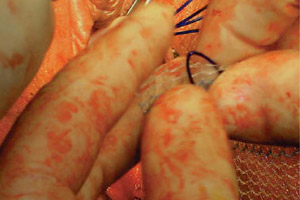 On December 21, 2015, a Philadelphia jury returned a $5.5 million verdict against Ethicon Inc., a unit of Johnson & Johnson, over the pelvic mesh implant, Prolift. The first verdict was for compensatory damages. The following day, jurors returned a verdict of $7 million in punitive damages.

There are approximately 8,000 pelvic mesh lawsuits pending in New Jersey state court and 35,000 pending in federal court. This case was heard in the Court of Common Pleas of the State of Pennsylvania, County of Philadelphia. According to Law360, this was the first case involving the Ethicon Prolift device to be tried in the Philadelphia mass tort. The jury agreed that the negligence of scientists was the cause of a woman’s injuries following implantation with the Prolift. The woman contracted dyspareunia (painful or difficult intercourse), according to lawsuit in the first of 180 cases in the mass tort to go to trial.

The lawsuit alleged that shards of the Prolift mesh were released into the woman’s body. She was implanted with the Proflift in 2009 to correct sagging internal organs, a condition known as pelvic organ prolapse (POP). The device was implanted between the woman’s bladder and vagina, ultimately becoming implanted in her bladder. Lawsuit allegations include that scientists and officials neglected to disclose adverse reactions associated with Prolift and also hid those risks from her surgeon. According to the lawsuit, the woman alleged that Prolift’s design is hopelessly flawed and constructed with too much mesh and too few holes, rendering it difficult for healthy tissue to grow around the device once implanted. The mesh, instead, led to scar tissue growth, which over time, contracts, pulling the mesh and leading to vaginal shrinkage, according to the lawsuit, Law360 wrote.

The Ethicon Prolift is constructed of a polypropylene mesh inserted through a vaginal incision. Ethicon ultimately announced it would no longer sell four types of transvaginal mesh devices, including the Prolift + M™, TVT Secur, Prolift, and Prosima. The U.S. Food and Drug Administration (FDA) also warned that complications associated with transvaginal mesh implants are “not rare” and indicated that no clear evidence exists that transvaginal mesh is better than non-mesh methods for treating POP and Stress Urinary Incontinence (SUI). In fact, the agency asked 33 pelvic mesh manufacturers to conduct post-market studies evaluating the dangers of the devices.

Complication reports, mounting litigation, and concerns over the lack of clinical testing have raised questions about the devices’ safety and efficacy, which were approved through a fast-track process known as the 510(k). Under the 510(k), a formal review for safety and efficacy is neither required nor performed. Because the 510(k) route has been used to gain clearance for other controversial products, such as metal-on-metal hip implants, the process has drawn increasing criticism.

Thousands of women were recipients of transvaginal mesh devices, which have come under increased scrutiny since many recipients of these devices began experiencing complications related to the devices’ alleged defects. According to an agency Safety Communication, the most commonly reported adverse events related to transvaginal mesh include: Mesh erosion through the vagina (exposure, extrusion, protrusion); pain; infection; bleeding; pain during sexual intercourse; organ perforation; and urinary problems. Not all of the very serious reactions to which transvaginal mesh has been associated are physical. Also, regarding the alleged risk of erosion, in which the transvaginal mesh travels through the body’s tissues, the device may become embedded in inappropriate areas, leading to multiple surgeries. Sadly, in many cases, erosion is so significant and widespread that the mesh cannot ever be completely removed.