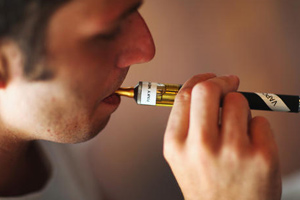 The study, published online in Environmental Health Perspectives, revealed that 75 percent of the 51 flavored liquids tested contain the chemical, diacetyl, and other harmful compounds. The flavors tested “included varieties with potential appeal to young people such as cotton candy, ‘Fruit Squirts,’ and cupcake.” Many believe that fruit flavor diacetyl, alcohol flavor diacetyl, and candy flavor diacetyl may be associated with flavorings-induced lung disease.

The name Popcorn Lung (or Popcorn Workers Lung) traces to the cases of eight former employees of a popcorn factory in Missouri that manufactured artificial butter flavoring for microwave popcorn. The workers inhaled diacetyl from the flavoring on a routine basis and developed wheezing, coughing, shortness of breath, night sweats, and weight loss, the National Institute for Occupational Safety and Health (NIOSH) reports.

The symptoms of popcorn lung usually occur gradually and become progressively worse. Symptoms of the disease include:

Breathing tests, chest X-rays, chest scans, and lung biopsies are usually needed to diagnose bronchiolitis obliterans. Often, patients are thought to have pneumonia, asthma, or other lung ailments before a final diagnosis of Popcorn Lung/bronchiolitis obliterans is made. According to NIOSH, most cases of bronchiolitis obliterans show little or no response to medical treatment. While the coughing and wheezing may ease somewhat over time, abnormalities on lung function tests persist. Some people with severe cases have been placed on lung transplant lists.

In their study, the Harvard researchers tested 51 types of flavored e-cigarettes and liquids sold by leading e-cigarette brands for the presence of diacetyl, acetoin, and 2,3-pentanedione, two related flavoring compounds that the Flavor and Extract Manufacturers Association lists as “high priority,” for respiratory hazard in the workplace, the Harvard Gazette reports. The researchers inserted each e-cigarette into a sealed chamber attached to a device that drew air through the e-cigarette for eight seconds at a time with a resting period of 15 or 30 second between each draw. The air stream was then analyzed.

People who “vape” with flavored e-cigarette liquids inhale diacetyl regularly. Many e-cigarette users are teenagers and many states still permit e-cigarettes to be sold to minors. The U.S. Food and Drug Administration (FDA) is considering new regulations that would prohibit the sale of e-cigarettes to minors. Many hope that liquids that are diacetyl-free will be considered.

Dr. David Christiani, MD, MPH, of the Harvard T.H. Chan School of Public Health, who co-authored a paper based on the study, said that, in addition to the addictive substance nicotine, most e-cigarette liquids “also contain other cancer-causing chemicals, such as formaldehyde, and as our study shows, flavoring chemicals that can cause lung damage,” according to the Harvard Gazette.