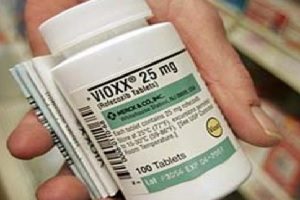 A Report Blast Vioxx Maker. The troublesome painkiller Vioxx should have been yanked from the market several years ago when growing evidence already pointed to a significant risk of heart attacks, according to a damning new report that blasts both the drugmaker and U.S. health officials.

The combined results of 29 studies and clinical trials completed before September 2000 – showed Vioxx more than doubled the risk of heart attacks or strokes, according to a report today in the influential medical journal The Lancet.

But it was only this Sept. 30 that Merck pulled its cash-cow arthritis drug, prompting a deluge of lawsuits against the pharmaceutical giant.

Merck said company officials “absolutely disagree” with the new study in The Lancet. “Merck acted responsibly and appropriately as it developed and marketed Vioxx, and made decisions based on all available data at the time,” the company said in a statement.

The new report is the latest blow against Merck, which has been hit with at least 300 lawsuits from people claiming to have been harmed by the once-popular drug.

“This study just adds to the overwhelming evidence that this drug never should have been marketed and, once it was marketed, the FDA should have acted immediately to get it withdrawn,” said lawyer Jerrold Parker, whose firm Parker & Waichman has been retained by more than 1,000 plaintiffs in Vioxx lawsuits.

Analysts estimate Merck’s legal bills from the Vioxx mess could top $17 billion over the next decade or so.

The new research is accompanied by a scathing editorial by Lancet editor Dr. Richard Horton faulting Merck for “astonishing failures” in safety monitoring and the FDA for “lethal weaknesses” in oversight.

FDA official Sandra Kweder told The Associated Press that agency scientists checked Vioxx for heart risk as it reviewed Merck’s application for approval of the drug, starting in 1998. “The record shows that we were on top of this very difficult scientific issue on a near daily basis from the very beginning.”

Meanwhile, the safety of Vioxx’s competitor, Celebrex, was called into question yesterday when a Canadian newspaper reported that government documents showed Celebrex was linked to at least 14 deaths.

Pfizer, the maker of Celebrex, called the report misleading and said the report was not backed up by any studies.