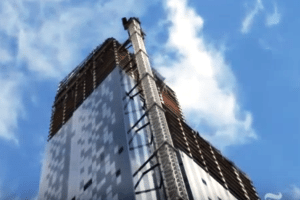 Tougher Safety Standards For Tower Construction Cranes. Officials from New York City testifying before a Congressional committee yesterday urged the federal government to enact tougher safety standards for tower construction cranes. The testimony came in the wake of two separate crane collapses in Manhattan that killed a total of 9 people.  While the New York officials said the city was enacting its own tough  new crane rules, they told members of the House of Representatives Education and Labor Committee that federal rules were vital, because one tower crane can be used on construction jobs in multiple states.

This year New York saw two fatal crane collapses within a two month period.  The most recent, which killed two construction workers, occurred last month, when a 200 foot crane perched atop a high-rise under construction collapsed and fell about 30 stories to the ground below. In addition to the two fatalities, a third worker was seriously injured.  A large portion of an adjacent high-rise apartment building was destroyed as well.  The investigation into that crane collapse is said to be focusing on a rebuilt part that may have failed. The Manhattan District Attorneys’ office has also launched a criminal probe into the incident.

7 People Were Killed By Collapsed Crane

Seven other people were killed because of a crane collapse that occurred in March, just a couple of miles south of last month’s tragedy.  Following that incident, a city inspector – who allegedly had lied about inspecting the doomed crane in the weeks before the collapse – was arrested for falsifying records. The March crane collapse also led to the resignation of New York City Buildings Commissioner Patricia Lancaster.

Current Buildings Commissioner Robert LiMandri told the committee yesterday that his department is increasing requirements for testing cranes and their components; for reviewing maintenance records and for tracking cranes and their parts as they move from job to job.  But LiMandri insisted that crane safety won’t improve unless the federal government acts.

Many states have not implemented training requirements for people who work with cranes.  Some states don’t even have certification requirements for crane operations, and they don’t even bother to keep track of the number of cranes that operate in their state at a given time.

On the Federal level, the Occupational Safety and Health Administration (OSHA) hasn’t updated its crane standards since 1971. A federal advisory committee reached consensus on wide-ranging new rules in 2004, but the enactment of those rules have been bogged down.   Edwin G. Foulke Jr., OSHA’s assistant secretary of labor, told the committee that he believed that new crane regulations wouldn’t be enacted until 2009.

Though New York crane collapses have garnered the most attention recently, such accidents are not limited to that city.  In 2006, the last year for which federal figures are available, 72 workers died in crane accidents around the country.