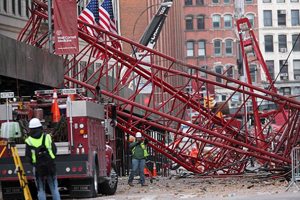 The New York City crane collapse occurred on the east side of midtown Manhattan the afternoon of March 15.  The crane was being used in the construction of a 43-story luxury apartment building. The crane broke into pieces as it crashed down onto 51st street, not far from the United Nations Building. The crane collapse destroyed a townhouse, and seriously damaged five other buildings. The New York City crane collapse killed six workers from the construction site, as well as a Florida woman visiting the city who was staying with a friend in the destroyed townhouse.

Yesterday, OSHA announced it was citing Reliance Contractors Group, the general contractor; Rapetti Rigging Services, Inc., the crane erector; and Joy Contractors Inc., the concrete subcontractor on the project, in the accident.  The charges against the companies included failure to properly train employees about job site hazards and allowing hazards to exist.

OSHA handed down the toughest penalties to Rapetti Rigging. The agency said Rapetti had failed to comply with the crane manufacturer’s specifications when erecting and raising the steel tower. The failure of the company to inspect the nylon slings and notice pre-existing cuts and snags was one of three factors that led to the collapse, OSHA said. The citations against Rapetti include three willful violations, the most severe issued by the agency, and five serious violations.  Rapetti’s fines totaled $220,000.

According to OSHA, Reliance Construction Group was issued 11 citations totaling $19,500 in proposed penalties.  Joy Contractor was issued one repeat and 14 serious citations worth $74,000.   They were cited for a range of issues unrelated to the March 15 crane collapse that were uncovered in an inspection after the accident.

“Ultimately, the crane collapse was a failure to follow basic, but essential, construction safety processes,” Richard Mendelson, area director of the OSHA, said in a statement.

The March collapse, and another that killed 2 people in May, has painted an unflattering picture of the way construction sites in New York city are regulated. Following the March incident, a city inspector – who allegedly had lied about inspecting the doomed crane in the weeks before the collapse – was arrested for falsifying records. The March crane collapse also led to the resignation of New York City Buildings Commissioner Patricia Lancaster.  A criminal investigation into the May accident is ongoing.

According to city records,  the crane rigging license of  William Rapetti  – owner of Rapetti Rigging and its only full-time employee –  expired in July.  The New York City Buildings Department has placed a hold on it,  in case he seeks to renew it.