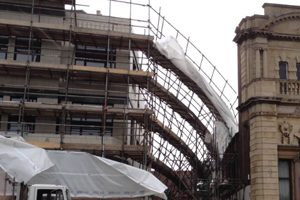 A Worker Was Injured After Falling 50 Feet Down A Shaft. A construction worker was injured yesterday after falling at least 50 feet down a shaft, police said.

The worker, identified as Yugo Beja, 23, of Elizabeth, was standing on a scaffolding when a thick hose filled with water struck the scaffolding and knocked Beja off of it and down the shaft, police said. The stair shaft is about five stories high.

The spot where the 7:30 a.m. accident occurred is in the 400 block of Boulevard East, near a NJ Transit bus lot.

Police Responded To The Scene

Weehawken police officers Ellia Almoyan and John Decosmis responded to the scene and two construction workers showed them where Beja had fallen.

“When they got to him, he was conscious but had some facial and arm injuries,” Weehawken Deputy Chief Robert Del Priore said.

After firefighters and paramedic workers arrived, Beja was placed on a stretcher and carried up the shaft, police said. He was taken to Jersey City Medical Center, where he remains under treatment for his injuries. Police said his injuries didn’t appear to be life-threatening.