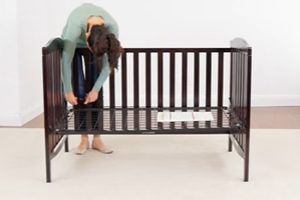 Jardine Expand Recall Cribs. For the second time, Jardine Enterprises is expanding a crib recall. The original recall was issued last June because slats and spindles on the defective cribs were prone to break, and create an entrapment and strangulation hazard to infants in the beds. More Jardine cribs were recalled in January for the same problem.

The first Jardine crib recall involved 320,000 beds, and was issued after the company received 42 reports of crib slats and spindles breaking. The January expansion, which involved more than 56,000 additional cribs, was issued following 19 more reports of crib slats breaking. In nine of these incidents, consumers reported that their infant or toddler broke the slat while in the crib. In addition, a 22-month-old child fell through the gap between the crib slats when a slat broke.

Today’s Jardine crib recall expansion was issued because there have been 31 more reports of slats breaking, including two reports of children becoming entrapped in the gap created by the broken slat on the crib models identified below. In 10 of these incidents, consumers reported that their child broke the slat while in the crib. There was one report of minor injuries (bumps and abrasions.)

According to the Consumer Products Safety Commission (CPSC), this latest Jardine crib recall involves the following 7 models of wooden cribs:

Cribs with other date codes are not affected by this recall. The date code and model number are printed on the label located on the inside of the bottom rail of the headboard or footboard.

The recalled Jardine cribs were sold at KidsWorld, Geoffrey Stores, Toys “R” Us, and Babies “R” Us stores nationwide, and at babiesrus.com, from September 2005 through April 2009 for between $220 and $330.

Consumers should immediately stop using the recalled cribs and contact Jardine to receive a full credit toward the purchase of a new crib. Jardine will provide consumers with detailed instructions for purchasing cribs in retail stores and online.