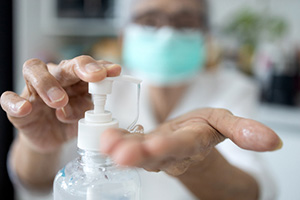 Illinois – According to a news report on newsweek.com, a family has filed a federal lawsuit against 4e Brands North America, the Blumen Hand Sanitizer manufacturer.  The wrongful death lawsuit alleges that the family’s loved one was an alcoholic who consumed the company’s Blumen hand sanitizer and subsequently died due to methanol poisoning.  The 32-year-old woman died at a St. Louis hospital after she allegedly drank Blumen Advanced Instant Sanitizer.  Blumen Advanced Instant Sanitizer was recalled about seven months ago due to the possible presence of methanol.  The recall was then expanded to include many other hand sanitizers manufactured by the company.

According to a federal lawsuit filed in St. Louis, the St. Louis County medical examiner concluded that the victim’s death was caused by acute methanol intoxication.  The Associated Press (AP) reported that a Blumen Advanced Instant Sanitizer bottle found with the woman tested positive for dangerous levels of methanol.

Methanol is toxic to humans.  Methanol can be absorbed through the skin, causing severe side effects such as vomiting, blurred vision, permanent blindness, coma, seizures, permanent damage to the nervous system, and death.  If methanol is consumed, it can be life-threatening.

FDA’s statement last July warned that people who drink products as a substitute for alcohol (ethanol) are most at serious risk for fatal methanol poisoning.  The FDA has also warned manufacturers who fail to immediately recall all potentially contaminated products are placing purchasers in grave danger of methanol poisoning.

Blumen Hand Sanitizer is manufactured by 4E Global in Mexico.  In late January of 2021, all Mexico manufactured alcohol-based hand sanitizers were placed on the U.S. import alert.  The FDA stated that throughout the course of the pandemic, the FDA had seen a dramatic uptick in hand sanitizer products important being shipped in from Mexico that shows ethanol (ethyl alcohol) as an ingredient but was found to contain methanol.  The FDA found that about 84% of all alcohol-based hand sanitizers imported from Mexico did not comply with FDA regulations.  In January 2021, the FDA found over 50% of the samples contained dangerous levels of toxic ingredients, including methanol and/or 1-propanol, at dangerous levels.

Did you lose a loved one due to negligence of another?  Parker Waichman LLP helps families receive justice and full monetary compensation for the loss of their loved one. Trust your case with our wrongful death lawsuit lawyers. For a free consultation, contact our law firm today by using our live chat or calling 1-800-YOUR-LAWYER (1-800-968-7529).