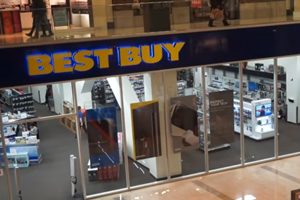 The CPSC is advising consumers to immediately stop using the recalled televisions and recalled power sources and to contact the Best Buy hotline to receive a gift card for the value of a replacement television.  Best Buy can be reached toll-free at 1-800-233-0462 between 9:00 a.m. and 9:00 p.m. Central Time daily, or at the firm’s Website at www.bestbuy.com.

Best Buy is recalling about 13,300 Insignia 26-Inch Flat-Panel LCD Model IS-LCDTV26 Televisions because the televisions’ power supply can fail, posing a fire and burn hazard to consumers.  To date, Best Buy has received two reports of fires that included damage to the television and wall.  One consumer reported minor burns to the hands.

The recalled Insignia 26-Inch Flat-Panel LCD Television’s model number is printed on the back of the television and the word “INSIGNIA” is printed on the bottom front.  No other Insignia model televisions are involved in this recall.  The recalled Insignia televisions were sold exclusively at Best Buy stores nationwide, at www.bestbuy.com, and at www.bestbuyforbusiness.com from August 2005 through June 2006 for about $800.

Best Buy is recalling about 1,400 Rocketfish Model RF-INV80 Universal AC/DC/USB Portable Power Sources because, when charging the battery, the power source can unexpectedly ignite, posing a fire hazard to consumers. “Best Buy” has received three reports of fires resulting in minor property damage; no injuries have been reported.

Advocates argue that part of the problem has to due with a shift in recent years to off shore manufacture of a wide variety of consumer products to locations that are unable, for an array of reasons, to ensure product safety.  For instance, less reliable safety standards, and a push for cost cutting have created an environment that enables products be made under conditions in which safety is compromised over cost. According to a report issued last year by the advocacy group Public Citizen, Chinese-made toys accounted for the vast majority—over 94 percent—of 2007’s recalls, mostly due to excessive lead levels in paint, mostly because lead paint costs significantly less than nonleaded paint.  Not to mention that the hourly wage for toy manufacturing workers in 2006 was 36 cents, about 2.5 percent of the U.S. wage.