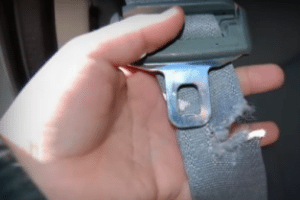 Seatbelts Defect Can Result In Death. Seatbelts play an important role in passenger protection during accidents. Properly designed seatbelts should restrain the occupant by stopping ejection and decreasing the passenger’s movement within the vehicle during a crash. Seatbelt defects can result in death and serious injuries.

More than 100 million cars in America have seatbelts with the release button on the front face of the buckle. In some rollovers, frontal collisions and side impacts, the release mechanism can be disengaged when the back of the buckle hits part of the seat structure or of the human body. Manufacturers are reluctant to admit the existence of this defect. However, in Malone v. General Motors, crash tests videos were introduced into evidence which demonstrated seatbelt unlatching in internal tests conducted by General Motors.

Over the last several years, there have been several landmark cases against Japanese and American automobile manufacturers pertaining to this defect. During impact, the release of the seatbelt happens as a result of force or energy being applied to the back of the buckle in the form of the forward movement of the occupant into the buckle. When the initial energy is transformed into the spring of the buckle, it releases the tension on the latch plate, allowing it to come open.

When this happens, the occupant is then as if he wasn’t belted at all. Relatively low forces during a wreck can cause the button to depress, permitting the latch plate to be free.

If you or a loved one has been injured by a defective seatbelt, please fill out the form at the right for a free case evaluation by a qualified product liability attorney or call us at 1-800-YOURLAWYER (1-800-968-7529).