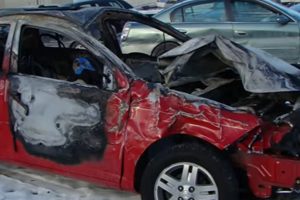 General Motors Recall Defective Cars After Posing A Fire Hazard. In the wake of a humiliating government bailout, its CEO’s forced exit, and talk of a possible bankruptcy, General Motors Corporation is now facing a massive recall. The automotive giant just initiated a recall of nearly 1.5 million defective cars over concerns of possible engine fires, Market Watch reported. The affected cars were manufactured between 1997 and 2003 and include the following model years and makes:

There is the potential for oil to leak into the exhaust system, which can lead to a risk of an engine fire in the automobiles’ 3.8-liter V6 engine, Market Watch explained.  The Weekly Driver explained that, according to Automotive News, the engine oil could potentially leak past a heat shield, dripping on to the exhaust manifold, which causes the fire hazard, especially during hard braking, added Reuters.  The National Highway Traffic Safety Administration (NHTSA) said that a small fire could ignite and spread to a plastic sparkplug wire guide and beyond, into the car’s engines, noted The Weekly Driver.

In response to the problem, said The Weekly Driver, citing the NHTSA, GM dealers will remove the plastic spark plug retention guide and install two spark plug wire retainers, at no cost to consumers.

The Weekly Driver reported that, according to government paperwork, as of about a year ago GM reported one accident with an injury for a total of three “incidents” connected to the problem.  No fatalities have been reported to date related to the problem.  Some 1,497,516 mid-sized cars equipped with a 3.8-liter engine are affected by the recall, said Reuters; however, according to The Weekly Driver, the supercharged version of the 3.8-liter engine is not involved.

In 2004, GM led the auto industry in U.S. recalls and, in 2005, GM recalled over two million vehicles to fix a variety of potential safety defects, most on cars and trucks sold in the United States. Of the 2005 recalls, the largest of the safety actions included nearly 1.5 million full-size pickup trucks and sport utility vehicles from the 2003-2005 model years with second-row seat belts that were potentially difficult to properly position across passengers’ hips.  Five other recalls were announced by GM in April 2005 alone that included over 300,000 vehicles’ possible overheating of fuel pump wires that could lead to engine stalling, failure to start, a possible fuel leak, and inaccurate fuel-level readings.

In August of that year, a recall that began with over 800,000 full-size pickup trucks and SUVs in 14 states was extended to include an additional 553,000 vehicles and six more states as well as the District of Columbia.  That recall involved the unwanted application of the anti-lock brake system, which could cause increased stopping distances during low-speed braking. Over 200 crashes and some minor injuries were linked to that problem.