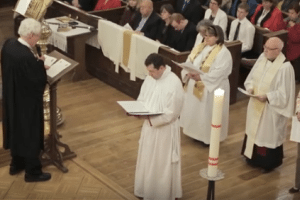 Catholic Clergymen Have Been Accused Of Abuse. At least eight Catholic priests and brothers affiliated with religious orders have been accused of abusing children in the Cincinnati area since 1950, a newspaper reported Saturday.

The Cincinnati Enquirer surveyed the 11 religious orders with offices or missions in the area that encompasses the Archdiocese of Cincinnati.

Five of the accused clerics are now dead, and the other three have been removed from the ministry, the newspaper reported.

The survey found that the total number of clerics accused in the archdiocese since 1950 is at least 57. A national study released last month estimated that total at 49, but that study only included priests affiliated with the archdiocese.

The religious orders are independent of the archdiocese and include more than 240 priests and brothers from the Franciscans, Dominicans, Jesuits and other groups.

priests of the archdiocese

Victims’ advocates said religious orders have, for the most part, avoided the same kind of scrutiny that priests of the archdiocese have faced.

Clohessy said the orders’ independence, as well as their tendency to frequently move their priests around the country, often makes it more difficult for law enforcement and lay Catholics to keep track of abusive clerics.