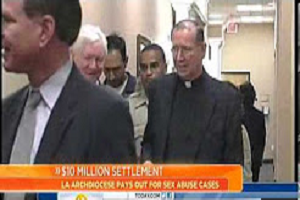 Bud Bunce, spokesman for the archdiocese, said that under the judge’s order he could not confirm the settlement.

The priest, Rev. Maurice Grammond, is 79 and lives at the Alzheimer’s unit of a retirement center in the suburban Gresham.

Grammond was accused of sexually abusing boys while he led parishes in Seaside and in Oakridge.

The archdiocese was accused of failure to monitor Grammond, failure to notify parishioners and advise authorities, and failure to have other adults accompany Grammond on camping trips and other youth activities.

The original lawsuits sought roughly $2 million in damages for each man, or about $44 million, he said.

A number of men came forward after reports of an initial lawsuit against the priest filed by Joe Elliott, 41, who grew up in Seaside and now lives in Portland.