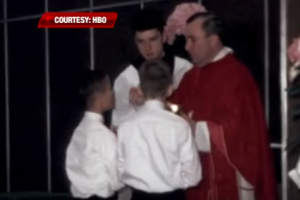 Edward Cardinal Egan has scrapped a controversial plan to screen sexual abuse complaints against priests and agreed to send allegations directly to prosecutors, the Daily News has learned.

The leader of the New York Archdiocese also plans to tap wealthy Catholic donors for a fund that would help falsely accused priests pay their legal bills.

Egan outlined his new policy in a letter mailed yesterday to Manhattan District Attorney Robert Morgenthau and to the other district attorneys in the 10-county, 2.4 million-parishioner archdiocese.

The plan departs sharply from one Egan announced last month in which a review panel of church officials and outside experts would have decided which allegations to report to law enforcement.

Victims’ advocates and prosecutors had criticized the proposed panel as a way for the church to continue covering up abuse.

Archdiocesan spokesman Joseph Zwilling said yesterday, “We met with the district attorneys. We heard and understood their concerns and revised our policy in an effort to cooperate as fully as possible.”

a priest has sexually abused a minor

The new policy for the New York Archdiocese states: “When an archdiocesan official has reason to suspect that a priest has sexually abused a minor, the archdiocese will immediately refer the matter to the appropriate district attorney’s office for investigation.”

Zwilling said the policy means “allegations of sexual misconduct of minors involving priests will be turned over to prosecutors without a prior review.”

The letter also says that when church officials receive a complaint, “The complainant will be strongly urged to report the complaint immediately and directly to the appropriate district attorney’s office.”

Egan and Daily have shifted course on key issues as the nationwide pedophile priest scandal has unfolded in recent months.

They initially refused to turn over past allegations against priests, but then gave in amid mounting public pressure.

Despite his new get-tough stance, Egan has assured priests that he’ll fight for any clergyman wrongly accused. During a private meeting with priests last month at St. Joseph’s Seminary in Yonkers, Egan announced plans to set up a legal defense fund for innocent priests.

“He said he would approach friends who are financially able to help to create a fund,” said the Rev. Aldo Tos, pastor of St. Joseph’s Church in Greenwich Village.

It was unclear how Egan would know which accused priests were innocent. Tos said Egan did not say whether the defense fund would pay for lawyers while allegations are being investigated or whether payments would be delayed until a priest was cleared of wrongdoing.