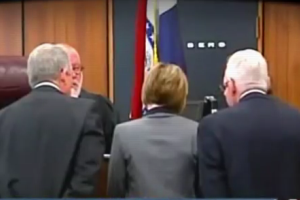 Clergy Sex Scandals. The Episcopal Diocese of Southwest Florida has launched a review of personnel files of present and former clergy dating back to the jurisdiction’s founding in 1969.

The Diocese of North Carolina, meanwhile, is seeking reimbursement for legal costs incurred in connection with a former area priest who has been accused of having sex with a teenage girl.

The examination of almost 700 clergy files, which began at the end of June, was spurred by recent accusations of sexual misconduct by the North Carolina priest and a former East Lake priest, now retired. The diocese expects to finish the search soon. So far, 90 percent of the files of active clergy – about 200 – have been examined and have yielded no new information of improper conduct by clergy, diocesan officials said. In some cases, the files contain sealed envelopes that can be opened only by the bishop or someone authorized by him. For the review, Bishop John B. Lipscomb has given Thomas C. MacDonald Jr., a Tampa lawyer and legal counsel for the diocese, permission to read the contents of the envelopes.

Diocese spokesman Jim DeLa said: “What prompted us to do this basically was the fact that we had two cases come up very close to each other and they both involved behavior or activities close to 25 years ago and the allegations are just surfacing now.”

DeLa said the diocese of 38,000 Episcopalians, which stretches from Brooksville on the north to Marco Island on the south and extends as far east as Plant City and Arcadia, wants to make sure that anyone who may have been harmed comes forward and receives help.

“And also, if there are people in positions of authority that may be misusing their office or had before, we want to make sure that doesn’t happen again,” DeLa said.

The recent accusations, one of which became public in June, were made against the Rev. Richard Arthur Pollard, 73, and the Rev. Michael G. Langston, 37. Both men have been forced to leave the priesthood.

Additionally, a letter mailed Thursday to members of St. John’s Episcopal Church in Tampa and parents of students at its school told of the Rev. Jon Caridad, who was fired in 1977 and quit the priesthood after he was accused of “inappropriate behavior with a student.” Caridad later was permitted to return to the priesthood, his way smoothed by a committee that included Pollard, himself recently stripped of holy orders.

Caridad, 59, came before the public eye again recently when someone brought abuse charges against him before the Diocese of Mississippi, where he was serving. The victim said the abuse started in 1973, DeLa said. In May, for the second time, Caridad renounced his ministry.

Pollard, who retired from All Saints Episcopal Church in East Lake in 1992, was accused of sexually abusing two teenage boys during the 1970s. He renounced his orders June 8 after learning that the allegations were going to be referred to the diocese attorney for investigation. Pollard, who had served in the diocese since 1964, did not admit to any wrongdoing, DeLa said.

Two days later, Bishop Lipscomb, who interrupted his three-month sabbatical to deal with the issue, met with All Saints parishioners. DeLa said the bishop told them that there had been an earlier accusation against Pollard.

Langston, the other priest, was accused of having sex with a teenage girl

Langston, the other priest, was accused of having sex with a teenage girl while he was an assistant at St. Paul’s Episcopal Church in Naples, a congregation that falls within the local diocese. Langston served there from 1991 to 1996 and went on to Holy Trinity Episcopal Church in West Palm Beach, in the Diocese of Southeast Florida, where he also was accused of sexual misconduct. From West Palm Beach, he was hired to head St. Stephen’s Episcopal Church in Erwin, N.C. He began that job on July 1, 1999. Two years later allegations of misconduct against Langston were brought to the attention of the North Carolina diocese.

“His initial ministry in that parish was very successful,” said the Rev. E.T. Malone Jr., a canon and spokesman for the Diocese of North Carolina.

“He was a very popular rector. New families were coming in. All the more disappointing when these charges surfaced. He was an engaging and attractive personality who revitalized the parish. There was a great deal of support for him in the parish. A lot of people didn’t believe it. . . . Many people felt that the charges might have been brought about by a spurned girlfriend.”

In October, the diocese brought 15 charges against Langston for misconduct. There were accusations of immorality, conduct unbecoming of a priest, adultery, cohabitation, statements made under false pretenses and sexual relations with a minor, said Malone, the North Carolina diocese spokesman.

The priest hired an attorney to prepare for an ecclesiastical trial in the fall but subsequently decided not to contest the charges. On June 26, he was removed from the priesthood.

Malone said there is no thought that the bishops who allowed Langston’s transfer from diocese to diocese had been aware of allegations against the former priest.

“What our bishop has expressed is that we would like to have some financial help from the two Florida dioceses, because we have had thousands of dollars in legal costs and we feel that most of this dealing with misconduct, that didn’t occur in our diocese,” Malone said.

“The original charges were primarily based on things that happened in Southwest and Southeast Florida and they have not been willing, to my knowledge, to accept any responsibility for legal fees.”

Durning, the local bishop’s assistant, said he was unaware of any request for compensation. He added that no request has been made by the victims of either priest for compensation, but that the diocese has offered and paid for counseling in connection with the allegations.

Meanwhile, MacDonald, legal counsel for the diocese of Southwest Florida, expects to finish examining the files of active priests within the next few days.

“I’m looking for anything that suggests that a complaint was made and not dealt with or was simply missed,” he said.

MacDonald declined to say whether he had made any discoveries.

“I’m not going to comment on that until I’m finished and talked to the bishop, because in some instances, those files may not be complete,” he said.

Durning said the information in the sealed envelopes is sensitive.

Files are not forwarded with transferred priests, Durning said.

“If there is any incriminating evidence of a priest who hurt anyone in any way, Bishop Lipscomb would make that known to the other bishop. The sealed envelope would be examined before the (transfer) letters were sent.”

Measures are in place to prevent the hiring of problem priests, Durning said. And in 1994, the Episcopal Church’s House of Bishops instituted guidelines to prevent such priests from being shuttled from diocese to diocese.

“Bishops have been much more focused and honest with each other, at least since 1994,” he said.

Other methods of screening also are in place, he said.

Since 1994, the Episcopal Church insurance company has required each of the 100 dioceses to do background checks of clergy. In the diocese of Southwest Florida, that includes a check of driving records, credit and criminal background.

Interdiocese discussions by senior administrators serve as another filter, Durning said. Questions are asked about the conduct of priests, about untreated alcohol or drug problems, and financial or sexual misconduct.

“We also ask if there are any issues that would prevent the priest from being transferred from one diocese to the next.”