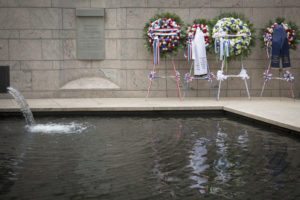 A flag that flew over the United States Capitol in honor of Lt. Shea was presented to his widow by John Feal, founder of the Feal Good Foundation. Feal says that 71 people have died from Ground Zero-related cancer in the past seven months, many of them from brain cancer.

Dr. Marc Wilkenfeld with Winthrop NYU remarked that brain cancer typically takes longer to develop than other cancers. “The cancers that people are getting from Sept. 11 are in some cases much more aggressive than the cancers you see in the regular population,” he says.

First responders to the September 11, 2001 terrorist attacks continue to fight illnesses associated to toxic dust exposure. This dust has been linked to numerous health conditions, such as cancer. In December 2016, a New Jersey state trooper and 9/11 responder died. He was diagnosed with glioblastoma, a type of malignant brain tumor.

Surgery was performed to remove the tumor, but it was in an area of the brain responsible for speech. At times, he could not find key words when forming sentences. He also experienced double vision. He had to remain awake during the surgery, so surgeons could ensure that his speech and thinking were not damaged during the surgery.

The State Police department announced the trooper’s death, and remarked that even in adversity, he …”maintained his sense of humor, positive attitude and can-do spirit,” The department echoed the lieutenant’s own words, saying, ‘Every day I put my feet on the ground and I look forward to winning. This is the mindset that I have, it’s about living without fear.'”

Parker Waichman LLP, is a national personal injury law firm that has stood for the rights of 9/11 responders and survivors since the disaster, and continues to advocate for them. Attorneys at the firm are available to answer any questions for individuals seeking legal information.

First responders and residents in lower Manhattan were exposed to a toxic plume of dust when the Twin Towers fell following the terrorist attacks. In the years since 2001, studies have shown that numerous health problems for those who were exposed to that dust while working on the rescue and recovery efforts, have higher rates of particular medical conditions, such as cancer.

Researchers have been studying the toxic dust exposure and its impact on health for years. The hazardous substances in that dust plume included asbestos; pulverized cement; polychlorinated biphenyls (PCBs); benzene; glass fibers; dioxin; gypsum; jet fuel; heavy metals, such as lead and other chemicals. Ground Zero exposure has been associated with more than 90 health problems, including more than 60 types of cancer.

Studies have also shown that Ground Zero exposure is connected to respiratory conditions. The journal Occupational and Environmental Medicine found that 9/11 responders typically did not recover lung function after the attacks, implying that these injuries may be permanent as well as debilitating. In 2016, a study was published that a higher rate of neuropathy, a type of nerve damage, was also linked to 9/11 exposure. 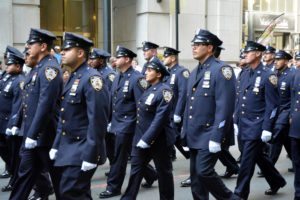 The Zadroga Act provides health benefits and compensation for those responders and survivors who suffer illnesses or injuries resulting from the September 11 attacks. It was named for James Zadroga, a 34-year-old detective who became ill after spending close to 500 hours working in the ruins of the World Trade Center, inhaling a mix of asbestos, pulverized cement, and other toxic chemicals. He died in January 2006 from an illness resulting from exposure to toxins at Ground Zero.

The Zadroga Act was reauthorized and extended in December 2015 and will provide sufficient funding and benefits to properly care for the first responders and survivors of the Sept. 11 attacks through 2090.

Statistics from the Centers for Disease Control and Prevention (CDC) show that more people are enrolling in the WTC Health Program, suggesting that the number of people suffering from 9/11-related conditions is increasing. Many respiratory conditions and cancers, take years to emerge.