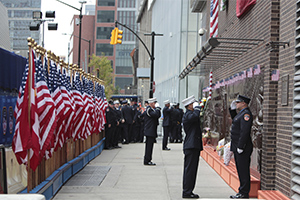 According to a study featured in the February 2022 edition of the Journal of the National Cancer Institute, a new study shows that 1,000s of first responders, cleanup crews, and local residents around Ground Zero are beginning to develop several types of cancers. The study states that several toxic chemicals have been found in dust and air collected around Ground Zero. Many of these substances are classified as probable human carcinogens by both the National Toxicology Program and the  International Agency for Research on Cancer.

World Trade Center firefighters, rescue workers, police officers, utility workers, construction workers, truck drivers, cleaning crews, maintenance personnel, residents, and volunteers were all potentially exposed to these harmful toxic substances. The study found that most of the people exposed to the toxic smoke and dust particles were white men in their thirties and forties when the World Trade Center was attacked. Unfortunately, it is estimated that about half of the first responders and workers at the Twin Towers were not wearing any respiratory protection, and they were exposed to cancer-causing substances.

The Journal of the National Cancer Institute piece says the study combined workers from three different cohorts: the General Responder Cohort, the World Trade Center Health Registry, and the Fire Department of the City of New York Cohort. The sample size had 69,102 workers, representing 72.4% of all rescue workers. The study connected several cohort members to cancer registries in thirteen states. The study also estimated that they analyzed the medical histories of approximately 93% of the workers and found that New York State’s cancer rates were higher in New York when compared to other states. The study also discovered that there was a substantial incidence of certain cancers, such as thyroid, tonsil, prostate, and melanoma of the skin.

The study showed that those who were exposed to the toxic fumes and smoke in the first few days of the attacks had a 47% higher cancer rate than those who worked at the scene later. These workers were mainly firefighters and law enforcement. That group also had notable increases in prostate cancer and melanoma.

The study’s findings also raise concerns that Brooklyn residents may also have been harmfully exposed to toxic smoke and soot that blew east and south toward Brooklyn. The study’s conclusion concerning toxic plumes of smoke and dust covering residences in Brooklyn during the initial three months means additional victims could suffer similar cancer risks. The study’s authors think the toxic smoke exposure in Brooklyn needs to be studied since lung illnesses are being observed in western Brooklyn residents. They feel there are more people who must be monitored and given medical treatment in the coming years.

Were you or a loved one exposed to smoke or dust from Ground Zero? Parker Waichman LLP helps those who have sustained injuries and/or those who lost a loved one receive monetary compensation for damages. Trust your case with our Zadroga Act Lawyers. For a free consultation, contact our law firm today by using our live chat or calling 1-800-YOUR-LAWYER (1-800-968-7529).