Puritan Bennett 980 Ventilators Injury Lawsuits. Our firm is investigating potential lawsuits on behalf of patients who suffered injuries or death related to the Puritan Bennett 980 Ventilator System (PB980), which was recalled in July 2015 because it may fail to deliver the sufficient amount of oxygen when in the neonatal Volume Control Plus (VC+) mode with active humidification. This life-threatening software defect prompted a Class I recall in July 2015 and involved about 650 ventilators.

If you or someone you know suffered adverse health consequences related to the PB980 recall, contact Parker Waichman today. 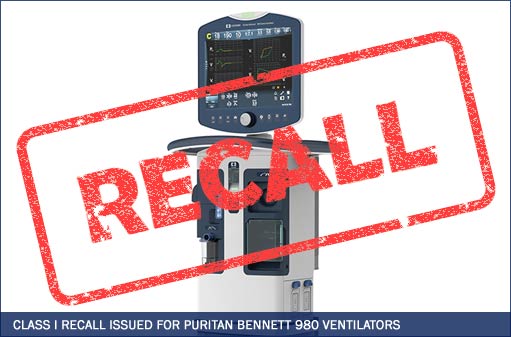 The PB980 is used in hospitals or during patient transport to provide constant breathing support to adults, children, and premature babies weighing at least 10.6 ounces.

The FDA designated the recall a Class I. Class I recalls are the most serious type of recall; they indicate that exposure to the recalled device can lead to serious injury or death. “If a patient does not receive the amount of air set on the machine, they may need to be removed from the ventilator and placed on a different system. A patient not receiving enough oxygen, can result in possible injury or death.” the FDA alert reads.

The drug maker received field reports that the VC+ mode, a specific breathing setting, may not deliver sufficient oxygen when used with another setting that humidifies the air, a setting typically used for neonatal patients. Since, Medtronic has been sending service engineers to reconfigure the PB980 devices and remove the NeoMode capability setting. Medtronic indicates that the PB980 is safe for other uses in adult and pediatric patients.

Meanwhile, in October 2014, the agency announced a Covidien recall of 324 of the PB980 ventilators. At that time, the agency’s notice indicated that ventilators with older software versions may have a defect that would cause the machine to stop working should air and oxygen supply lines be disconnected and reattached. “This can lead to serious health problems or death if the health care provider does not connect the patient to another ventilator or to a different form of breathing support,” the FDA’s 2014 notice last indicated.

If you or someone you know suffered injuries or death related to the PB980 recall, you may have valuable legal rights. Parker Waichman offers free, no-obligation case evaluations. For more information, fill out our online form or call one of our experienced personal injury attorneys today at 1-800-YOURLAWYER (1-800-968-7529).