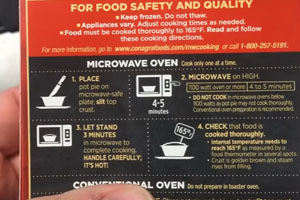 ConAgra’s Banquet and store brand pot pies were first linked to dozens of cases of Salmonella poisoning throughout the country on October 9. That day, ConAgra issued a health alert about the Salmonella pot pie outbreak, warning consumers not to eat any of its 7-ounce store brand or Banquet Pot Pies with the codes “P-9” or “Est 1059” on the package. Despite the health alert, ConAgra did not recall the tainted Banquet pot pies. Instead, ConAgra tried to deflect blame for the Salmonella pot pies by claiming that consumers caused the outbreak by failing to cook the pies properly.  On October 11, ConAgra finally did issue a pot pie recall.

Following the Banquet Pot Pie recall, it was learned that the US Department of Agriculture (USDA) had found deficiencies at the Missouri plant that manufactured the pies.  Reportedly, these deficiencies included problems with record keeping and with ConAgra’s Hazard Analysis Critical Control plan that spells out what the company does to ensure product safety.  The USDA did not elaborate on the nature of those problems, however, the factory was subjected to a 90-day verification by federal inspectors to insure that problems were corrected.

Now it seems as though ConAgra has realized that the cooking instructions on its Banquet Pot Pies made it impossible for customers to cook the pies correctly.  The company now says its previous cooking directions were confusing and that all ConAgra pot pies should be cooked to 165 degrees, a temperature high enough to kill bacteria. New Banquet packages also include more explicit instructions for cooking in microwaves of varying wattages.  The old Banquet package said on the front: “Ready in 4 minutes.  Microwaveable.”   On the back, in smaller type, the instructions specified four minutes in “medium” or “high” wattage microwaves and six minutes in “low” wattage ones.   ConAgra will also be updating cooking instructions on hundreds of other frozen foods, including the company’s popular Healthy Choice and Kid Cuisine lines.

Neither ConAgra nor the USDA has been able to determine the source of Salmonella contamination in the Banquet Pot Pies.  However, ConAgra said that it had implemented new testing procedures at the plant and with its ingredient suppliers to prevent further Salmonella contamination.  ConAgra resumed manufacturing its Banquet Pot Pies in November, and they are expected back on store shelves in January.

The ConAgra Banquet Pot Pie recall was the second time this year that the company issued a large-scale product recall because of Salmonella dangers. In February, the company recalled its Peter Pan and Great Value Peanut Butter after it was blamed for a Salmonella outbreak that sickened more than 600 people in 47 states. The Salmonella contamination was blamed on a leaky roof and malfunctioning sprinkler system at ConAgra’s manufacturing facility in Sylvester, Georgia.