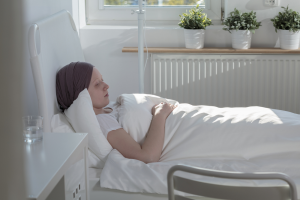 Taxotere Plaintiffs Allege Drug Makers Never Warned of Permanent Hair Loss. Sanofi-Aventis is facing some 800 lawsuits as part of a federal multidistrict litigation (MDL) in the U.S. District Court for the Eastern District of Louisiana. Plaintiffs allege that the chemotherapy drug Taxotere caused permanent hair loss, and that Sanofi-Aventis was aware of this risk but failed to warn patients or their doctors. Individuals suing over Taxotere allege that drug makers led patients to believe that their hair would grow back.

Lawsuits are consolidated into an MDL to make the legal process faster and more efficient. Similar lawsuits are grouped together in one court before one judge. Plaintiffs in the litigation allege that Taxotere caused permanent hair loss, also known as alopecia, and that Sanofi-Aventis failed to adequately disclose this risk.

Plaintiffs point out that Taxotere has carried a warning in Europe and Canada disclosing the risk of permanent hair loss for some time, but this information was not updated in the United States until 2015. Lawsuits cite an earlier patient brochure stating that “hair generally grows back” after using Taxotere. Now, the brochure states “In some cases (frequency not known) permanent hair loss has been observed.”

In December 2015, the U.S. Food and Drug Administration (FDA) announced that the label on Taxotere had been updated to state that “Permanent cases of alopecia have been reported,”

In the MDL, cases are consolidated before U.S. District Judge Kurt Engelhardt. The court has issued several orders in the MDL so far. Among other things, a master and short form complaint are due by Mar. 31. The judge has previously approved a plaintiff fact sheet and appointed representatives to settlement committees.

The master complaint contains allegations common to all plaintiffs in the Taxotere permanent hair loss MDL. The short form complaint is used to accommodate allegations that are specific to each plaintiff. In an MDL, basic allegations are the same but the severity of injuries can vary between plaintiffs. This is different from a class action lawsuit, where numerous plaintiffs in the litigation are represented by one lawsuit. The plaintiff class allege being wronged by a common defendant in the same way.

The U.S. Judicial Panel on Multidistrict Litigation (JPML) established the MDL after deciding that lawsuits shared “common factual questions arising out of allegations that Taxotere (docetaxel), a chemotherapy drug, causes permanent hair loss, that defendants were aware of this possible side effect and failed to warn patients. . . Plaintiffs in these actions each allege that they experienced permanent hair loss as a result of using Taxotere.”

In recent news, docetaxel (the generic name for Taxotere) has been associated with five deaths in France. Medscape reports that the ANSM (French National Drug and Health Product Safety Agency) sent a letter to French oncologists citing five deadly cases of neutropenic enterocolitis in patients taking docetaxel. This complication describes a type of inflammation in the small intestine and colon. The Institut Curie in Paris has stopped using docetaxel, replacing the drug with Paclitaxel. There has been evidence suggesting that use of Taxotere is associated with persistent alopecia. For example, plaintiffs cite the GEICAM 9805 study showing that 9.2 percent of patients taking Taxotere, Adriamcycin, and Cyclophosphamide suffered permanent hair loss more than a decade after taking the drug.

Researchers from the Rocky Mountain Cancer Center found that 6.3 percent (7 out of 120) women had persistent alopecia. “Such an emotionally devastating long term toxicity from this combination must be taken into account when deciding on adjuvant chemotherapy programs in women who likely will be cured of their breast cancer,” researchers stated.

In 2012, the Annals of Oncologist published a study citing permanent hair loss in Taxotere users. “Permanent and severe alopecia is a newly reported complication of the FEC 100–docetaxel breast cancer regimen,” the authors said. “Considering the increasing role of taxane-based therapies in adjuvant treatment, physicians and patients should be aware of this new distressing side-effect,”

Taxotere was introduced in 1996. It is used to treat cancers of the head and neck, breast cancer, prostate cancer, stomach cancer and non-small-cell lung cancer.

Our Taxotere side effects lawyer is here to help you when you need it the most.