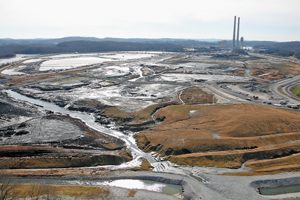 TVA Fossil Plant Fly Ash Spill Into Emory River. The Tennessee Valley Authority (TVA) Kingston’s Fossil Plant fly ash spill that dumped 5.4 million cubic yards of sludge into East Tennessee and its Emory River was seemed structurally sound only two months before the catastrophic accident that has decimated homes and water and wildlife, said Knoxville News.  The damage to some homes was so severe that repair is impossible.

According to Knoxville News, inspectors found the TVA Kingston pond sound based on the report of three engineers who inspected the facility and said that despite the raised pond’s walls seeping water and some scars in the structure as a result of erosion, the TVA plant was in “good shape.”

The inspection was conducted on October 20, 2008, said Knoxville News, and was completed after the December 22 TVA fly ash spill.

The report contains over 25,000 pages and was submitted to the Tennessee Department of Environment and Conservation (TDEC), said Knoxville News.  TVA engineer Chris Buttram included a note at the end of the report he authored that acknowledged that the spill took place following the inspection and that its cause is under investigation; Buttram also wrote, reports Knoxville News, “None of the observations noted during this inspection indicated a dike failure was likely to occur in the foreseeable future.”  Prior inspection reports describe leaks, erosion, seepages, and water-soaked walls, said Knoxville News.

Fly Ash Spill Was Much Worse Than The First

Most recently, Tom Kilgore, TVA head, admitted that the fly ash spill was much worse than TVA first admitted.  Just prior, and of significant concern, researchers discovered that the massive fly ash spill is exposing area residents and the environment to some serious and dangerous health and environmental problems, such as radium and arsenic exposure.

Radium—a Group-A carcinogenic material according to the Environmental Protection Agency (EPA)—exposure can lead to cancer.  Also, arsenic, a toxic metal, can increase the risk of some cancers, skin damage, and circulatory problems.

The clean up is expected to cost anywhere between $525 million and $825 million—said WBIR in a prior report and Kilgore said he will take a pay cut, reducing his 2009 compensation to half, which is still expected to still bring him about $1 million.

Phase I of the clean-up plan was submitted to the TDEC for approval and was reviewed by the Army Corps of Engineers, among others, said WBIR.  The groups provided feedback to TVA and await its revised plan.

TVA remains unclear about how long the cleanup will take and continues to investigate the cause of the spill, which followed a dike break, said WBIR. Of note, the massive spill was not TVA’s first accident and its records confirmed that a1984 annual inspection report indicated that an interior dike failed and that exterior walls were not meant for additional loads, according to an earlier report by the Knoxville Biz.

At that time, additional studies were recommended; it is unclear if such studies occurred.  Also, in 1984, a dike failure resulted in dredged material spilling into a then-dredged area as a result of a problem with an interior wall.  In 2003, another accident, which dumped water and fly ash on to Swan Pond Road occurred.

Our Fly ash spill law firm is here to help you when you need it the most.