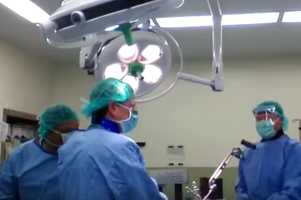 Orthopedic Docs Withheld Info About Industry Pay. A new study has found that doctors who presented research last year at the annual meeting of the American Academy of Orthopaedic Surgeons weren’t always as forthcoming as they should  have been about their financial relationships with the manufacturers of artificial joints. The study appears this week in The New England Journal of Medicine.

The financial relationships between  the medical industry and doctors have caused controversy in recent years.  In 2007, a U.S. attorney in New Jersey filed criminal complaints alleging that some of the largest artificial-joint makers conspired to violate a federal anti-kickback statute by making payments to surgeons in an attempt to keep their business.

As we reported the time, four of the companies, Biomet Inc., DePuy Orthopaedics, Smith & Nephew, and Zimmer Holdings Inc. – paid a total of $310 million, without admitting wrongdoing. A fifth manufacturer, Stryker Corp., cooperated with the probe and was not charged.

study measured the accuracy of disclosures

According to The Wall Street Journal, the New England Journal of Medicine study measured the accuracy of disclosures by orthopedic surgeons who presented research at  the 2008 meeting.  The authors of the study compared the doctors’ disclosures against a similar list published by the five firms involved in the 2007 settlement.

They found that the orthopedists did not disclose more than 20% of the payments they received from the artificial joint manufacturers when they were presenting research involving a the firms’ products.

Critics of industry payments to doctors have long held that such relationships create conflicts-of-interest, and could unduly influence everything from research findings to prescribing practices.

According to The Wall Street Journal, several states, including Massachusetts and Vermont, have enacted laws requiring medical companies to disclose the payments they make to doctors.  On the federal level, the Physician Payment Sunshine Act would require similar disclosure.  The legislation is currently part of the health reform being considered in the U.S. Senate, the Journal said.