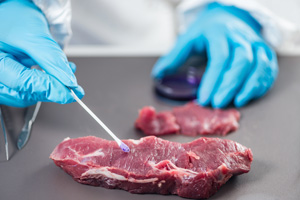 USA- Abc7ny.com writes that over 6.5 million pounds of beef were recalled over concerns that the meat could be contaminated with salmonella. The United States Department of Agriculture issued the recall on Thursday, October 4, 2018. The product originated in Arizona but has since been distributed across the country.

The recall impacts beef that was packaged on July 26 through September 7. All of the product is marked “EST. 267” within the USDA’s inspection mark. On September 5th, cases of salmonella began surfacing. The investigation involving the receipts and shopping history of the patients led to the suspicion that the meat products were the source of the illness.

There were 57 reported cases of salmonella between August 5th and September 6th. The outbreak impacted 16 states. Consumers who purchased the recalled meat should discard the product. It is possible that the contaminated meat is in many people’s freezers.

Salmonella is a type of foodborne illness that causes diarrhea, stomach cramps and fever. The common bacteria cause symptoms in patients in a matter of about 12 hours to 72 hours following the exposure. The illness typically will last for around four to seven days. In some instances, salmonella can lead to severe health consequences. The bacteria can get into a patient’s blood leading to more severe symptoms. These patients often require hospitalization and if the illness is not treated. The disease can become deadly.

Every year around one million people contracts salmonella in the United States. While most people recover on their own, around 19,000 people end up in the hospital, and an average of about 360 people die each year.

The product liability attorneys of Parker Waichman LLP are ready to begin your Salmonella poisoning case investigation today. If you or a family member have been harmed, injured or killed because of a defective product, speak with Parker Waichman LLP to receive your free consultation. Contact us by live chat, or by filling out our online form or by calling 1-800-YOURLAWYER (1-800-968-7529).

Have you or a loved one contracted Salmonella Mmbandaka after eating Kellogg's honey smacks cereal?