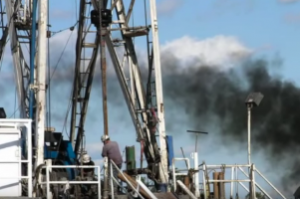 In NY, fracking is particularly controversial. The state’s Marcellus shale encompasses the entire Catskills watershed that provides New York City with all of its drinking water; residents there are worried that drilling could pollute the watershed. Of note, said USA Today, New York City’s is one of the few city systems not requiring water filtration.

Gas drilling via a process called hydraulic fracturing has been the subject of controversy nationwide, as well. Critics of hydraulic fracturing, also called fracking, claim the chemicals used in the process, coupled with a lack of regulation, are endangering the environment and the health of people who live near such drilling operations. Indeed, water contamination, air quality problems, and an increase in health ailments have been reported in several communities where fracking operations are prevalent.

Fracking proponents feel that drilling will save upstate NY where farmers are negotiating so-called gas leases and hoping for tax revenues from the gas that could be tapped from their land, noted USA Today previously. Not everyone agrees.

The Pittsburgh-Tribune Review pointed out that fracking has not been permitted in NY’s shale for about two years and, according to Jack Dahl, director of the Bureau of Oil and Gas Regulation in the New York Department of Environmental Conservation, NY will issue stringent rules before allowing the controversial process.

In Pennsylvania, the state’s Department of Environmental Protection has issued 3,800 Marcellus shale well permits since early 2008; over 1,400 violations have been filed against drillers, noted the Pittsburgh-Tribune Review. Drillers have been cited at gas wells in Pennsylvania and West Virginia, with dozens more over violations involving “discharges of industrial waste and poorly constructed impoundment ponds,” added the Pittsburgh-Tribune Review.

“We have learned from the other states, and what may be done in a different way if we don’t have it covered,” Dahl said, quoted the Pittsburgh-Tribune Review. In NY, regulators would mandate firms to disclose chemicals used in fracking, a point of contention today since such disclosure is not required. Fracking involves injecting water, sand, and a cocktail of chemicals at high pressure into rock formations thousands of feet below the surface. Because the federal Energy Policy Act of 2005 exempted fracking from regulation under the Safe Drinking Water Act, shale gas drillers don’t have to disclose what chemicals they use. According to a report issued by the Environmental Working Group, fracking has been linked to drinking water contamination and property damage in a number of states.

Also, said the Pittsburgh-Tribune Review, NY would require that flowback water be maintained in closed containers versus the “open pits” permitted in Pennsylvania, said Dahl. Pennsylvania is one of the states in which drinking water contamination and property damage have occurred. Dahl added that NY would not issue permits for more wells than could be inspected.

Some NY farmers are hoping for fracking and that the shale gas on their land will be tapped so that they can benefit from financial bonuses and royalties, said USA Today; however, other landowners are fighting against the gas drilling, which many feel will contaminate their water and environment.

The Governor of New York recently announced that fracking will not occur unless it can be proven that the procedure will not pollute water supplies.