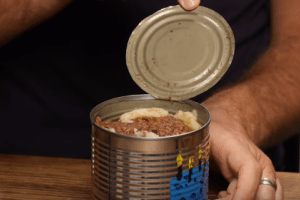 Botulism from Castleberry’s Food Company canned foods could still be a threat to consumers.   That’s because the Food & Drug Administration (FDA) still has not been able to account for every item that was included in the recall.   Because there is a chance that some people still have recalled Castleberry’s products in their homes, consumers should check their pantries and dispose of any canned products covered by this summer’s Castleberry’s canned foods  recall.

The Castleberry’s Food Company recall was initiated on July 18 after four cases of botulism poisoning were tied to Castleberry’s hot dog chili sauces.  Tests had confirmed that two Texas children and an Indiana couple were suffering from botulism.  All four of those victims had eaten one of Castleberry’s hot dog sauces.  The recall was later expanded to include 80 types of sauces, beans, stew, chili, hash and pet foods produced at the company’s plant.

The Castleberry’s botulism contamination was traced to a malfunctioning production line.

The Castleberry’s botulism contamination was traced to a malfunctioning production line at the company’s Augusta, Georgia plant. To guard against the formation of botulism toxin, canned foods are heated during processing to kill the bacteria. A cooker on the malfunctioning line was dropping cans into cool water before they were ready. The Augusta plant was permitted to reopen late last month, but the production line responsible for the botulism-tainted chili sauces will remain closed.

The Castleberry’s hot dog chili sauce botulism outbreak was the first related to commercially canned foods in more than forty years. The disease can cause paralysis and leads to death in about eight percent of cases. Fewer than 30 incidences of the disease are reported each year, and they are almost always linked to home canning. If not treated properly, botulism can paralyze breathing muscles.  Victims can spend months on ventilators until the botulism toxin is out of their system.

The Castleberry’s botulism outbreak was only one of a string of commercial food poisoning cases to plague the country this year. In February, the FDA ordered a recall of Peter Pan and Great Value peanut butter after they were tied to an outbreak of Salmonella poisoning. So far, more than 600 cases of illness have been tied to the contaminated peanut butter. In June, the FDA ordered a recall of Veggie Booty Snack Mix, a popular children’s treat, after more than 100 people became ill with Salmonella poisoning. And just last week, the Topps Meat Company recalled more than 21 million pounds of E. coli-tainted frozen ground beef patties after they sickened more than 2 dozen people in 8 states. The US Department of Agriculture has ordered the Topps processing plant in New Jersey to cease grinding beef until it corrects poor conditions at the plant that could have allowed the E. coli contamination to occur.