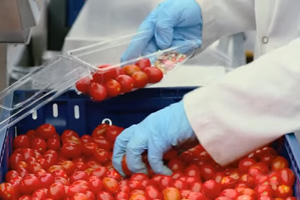 Salmonella Tomatoes Passed The 500 Mark. Federal regulators said today that the number of Salmonella cases linked to tomatoes has passed the 500 mark. According to the Food & Drug Administration (FDA), 552 people were sickened by the tomatoes, up more than 200 since the agency last reported on Wednesday. The FDA said that most of the reports represent people sickened weeks ago, but the outbreak is still considered to be ongoing.

The Centers for Disease Control (CDC) says it has detailed information on 281 of those Salmonella victims.  Individuals in that group became sick between April 10 and June 10. At least 53 persons were hospitalized. No deaths have been officially attributed to this outbreak. However, a man in his sixties who died in Texas from cancer had an infection with the outbreak strain of Salmonella at the time of his death. The CDC says the infection may have contributed to his death.

FDA Is Sending Inspectors To Florida And Mexico

The FDA said it is sending inspectors to parts of Florida and Mexico, the areas where the tainted tomatoes are most likely to have come from.  Investigators will focus on big packing houses or distribution warehouses that had the capacity to process enough tomatoes to account for such a large outbreak.

However, the agency is becoming less hopeful of ever finding the source of the Salmonella tomatoes.  Tomatoes are among the hardest foods to trace in an outbreak, because people seldom have any left by the time they get sick and they’re sold without tags to help trace their suppliers.   Dr. David Acheson, the FDA’s associate commissioner for foods, said that the longer the probe goes on, the less likely it is that the source will ever be found.