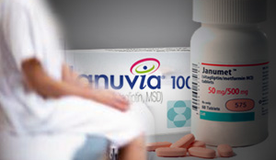 Januvia May Increased Cancer Risks. Our firm is investigating potential lawsuits on behalf of patients who suffered from pancreatitis, pancreatic cancer or thyroid cancer related to the use of glucagon-like peptide-1-based therapies such as Januvia (sitagliptin). Januvia is a prescription medicine used along with diet and exercise to lower blood sugar in adults with Type 2 diabetes, which occurs when there is not enough insulin to break down sugar in the body. Januvia came to the market in 2006 and is manufactured by Merck & Co., Inc.

Glucagon-like peptide-1 (GLP-1) is a gut hormone that helps secrete insulin. Januvia, is a dipeptidyl peptidase-4 (DPP-4) inhibitor; it helps stop the activity of DPP-4,the substance that breaks down GLP-1. Research has linked this glucagon-like peptide -1-based therapies to an increased risk of pancreatitis, and pancreatic cancer.

Chronic pancreatitis causes many of the same symptoms, but may also lead to weight loss. According to the Gastroenterology study, pancreatitis was six times more common among patients who took Januvia compared to those who took an alternative type 2 diabetes therapy.

Pancreatic cancer, where cancer develops in the tissues of the pancreas, is a usually rapidly spreading cancer that is rarely detected in the early stages. Unfortunately, the prognosis for this condition is often poor. According to MayoClinic, pancreatitis and diabetes are both risk factors for developing pancreatic cancer. Signs of pancreatic cancer often to do not appear until the advanced stages, they include:

The thyroid gland secretes hormones responsible for regulating heart rate, blood pressure, body temperature and weight. According to the National Cancer Institute, there were 496,901 people living in the United States with a history of thyroid cancer on January 1, 2009; this includes 109,920 men and 387,981 women. Although most cases of thyroid cancer can be cured with proper treatment, it has a tendency to come back, even if the thyroid has been removed. Signs of thyroid cancer include: