Home » The 19th Amendment and the Women’s Suffrage Movement 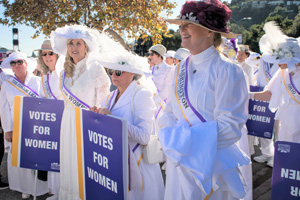 Before the 19th Amendment to the Constitution was ratified in 1920, women weren’t permitted to vote. This amendment declared that citizens of the United States wouldn’t be denied the right to vote based on their gender. The word suffrage comes from a Latin word that means, “the right to vote”. Women struggled to gain social and political rights for decades, and women’s suffrage was a major milestone.

The first women’s rights convention was the Seneca Falls Convention, held in 1848 and organized by Elizabeth Cady Stanton and Lucretia Mott. It was then that efforts to gain women’s suffrage began in earnest, although small groups were working toward this goal even decades before the Civil War. Voting was one topic discussed, but it wasn’t the main goal of this convention. A vote on women’s suffrage at the convention did not result in the passage of this resolution.

The Declaration of Sentiments

Elizabeth Cady Stanton and a group of delegates created a document titled, “Declaration of Sentiments.” They patterned this document after the Declaration of Independence, and its purpose was to state the position that women should have the right to vote. There was a fair amount of disagreement about the position of the Declaration of Sentiments, and some delegates withdrew their support due to this pressure. The Civil War also caused the suffrage movement to lose steam due to massive distractions.

The Formation of National Suffrage Groups

Some women’s suffrage activists began trying to vote in elections during the 1870s. When they weren’t successful, they filed lawsuits. The goal of these attempts was to raise awareness about the suffrage movement, and the activists were striving to have a lawsuit move up to the Supreme Court so that a ruling would giving women the constitutional right to vote. Unfortunately, in 1875, a Supreme Court ruling rejected women’s suffrage. This ruling forced activists to look for other ways to gain the vote for women. They organized a drive to pass a constitutional amendment. Their drive involved getting states to allow women to vote first, hoping that if enough states allowed it, federal law would follow. The drive was successful with more than half of the states in the Union already giving women the right to vote when the 19th Amendment was ratified.

In early 1878, Senator Aaron A. Sargent of California introduced the constitutional amendment to the Senate that would give women the legal right to vote. The bill was delayed in committees until 1887, when it was finally voted on and defeated. In 1914, the Senate considered another amendment for women’s suffrage. This bill was also rejected by the Senate. Carrie Chapman Catt was the president of the National American Women Suffrage Association at that time. She began a concerted effort to connect women’s suffrage with the World War I effort, portraying women’s right to vote as a patriotic movement. Catt’s drive was successful, and President Woodrow Wilson offered his support for women’s right to vote in his 1918 State of the Union address. Congress ratified the 19th Amendment on August 18, 1920 and the law finally gave women the right to vote.