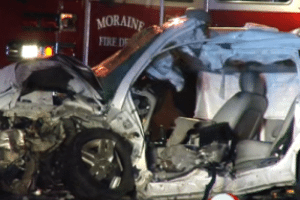 A Medical Emergency Played a Role In Fatal Crash. Nassau County police are investigating whether or not a medical emergency could have played a role in a fatal crash on Sunrise Highway and Helen Avenue. The early morning accident occurred when a 2007 Ford E150 collided with a box truck. The driver of the van, a 56-year-old man from Sound Beach, was killed. His 28-year-old passenger was transported to a hospital for his injuries. The box truck driver, 25, did not appear to be injured, police said.

The accident is being investigated by Nassau County police, Newsday reports. There was no evidence of criminality. In the early morning, the westbound van struck the 2017 Chevrolet box truck situated in a westbound left turn lane to enter Home Depot.

A stretch of Sunrise Highway was closed for four hours

Following the crash, a stretch of Sunrise Highway was closed for four hours.

A commercial van hit a tree, causing damaging to the driver’s side, a picture from the scene shows.

Another recent crash in Long Island left six people dead. An SUV, allegedly speeding, swerved into the left lane and across the grassy median when it came up on a work zone on the Long Island Expressway in Manorville. Reportedly, the driver lost control and became airborne before hitting two cars on the westbound side. The SUV driver, his 10-year-old son and his sister were all killed. The crash also killed a couple, ages 81 and 71, and a 29-year-old man who worked as the communications director for Suffolk County Executive Steve Bellone and was previously a staffer for Gov. Andrew M. Cuomo.