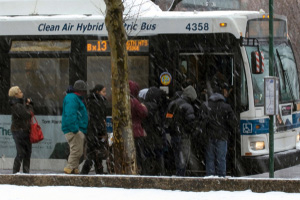 MORRIS HEIGHTS, NY – According to an online news report posted on news12.com, an MTA driver and seven MTA bus passengers were seriously injured in a bus accident in Morris Heights, New York. The bus crashed through a barrier and was left hanging dangerously off the side of an overpass.

The police opened University Avenue after the Department of Transportation team installed safety measures, including concrete barriers to close the hole left in the overpass’ guard rail left by the MTA bus.

According to police accident reports, the bus flew off of the University Avenue overpass at around 11 p.m. Police stated the crash occurred at the interchange of the Major Deegan Expressway and the Cross Bronx Expressway. Seven passengers suffered injuries, and the bus driver was severely hurt. All eight people injured in the tandem bus accident were transported to a local area hospital for medical treatment. One of the accident victims was in critical medical condition. A press release stated that the MTA driver submitted to and passed a breathalyzer test at the overpass accident scene.

The FDNY posted accident photos that show the articulated bus with an accordion-like midsection ripped in half. The back section of the bus remained on the highway, while the front section hung off of the overpass.

The cause of the MTA bus accident is not clear at this time. The preliminary reports suggest that the bus driver lost control of the MTA bus he was operating while navigating a left turn onto a highway ramp. According to officials, data retrieved from the bus by law enforcement officers indicated that the bus driver might have been attempting to turn left too fast. The transportation authority began its accident investigation by reviewing the bus’s video cameras, data recorder, and the onboard GPS system. The bus’s GPS data revealed that the bus driver attempted the turn at 17 to 26 miles per hour, which is much faster than the 3 to 5 mph required by the transportation authority’s rules.

Patrick Warren, chief safety and security officer for the transportation authority, stated in a news conference that the investigation is still ongoing, but speed was clearly a factor in the cause of the accident.

Were you or a loved one harmed in an MTA bus accident?

Parker Waichman LLP helps those who have been harmed in an MTA bus accident receive full monetary compensation. Trust your case with our accident lawyers. For a free consultation, contact our law firm today by using our live chat or calling 1-800-YOUR-LAWYER (1-800-968-7529).