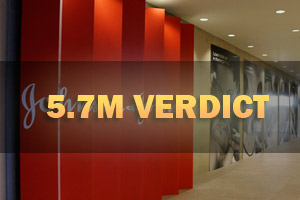 A jury in Bakersfield, California ordered Johnson & Johnson to pay $5.7 million in a case over injuries allegedly caused by Ethicon’s TVT-Abbrevo device. According to Associated Press, the jury found that the device was defectively designed and that the company failed to warn about the risks. The jury awarded $700,000 in compensatory damages and $5 million in punitive damages after hearing that the plaintiff allegedly suffered pain and urinary problems due to the device. J&J said it planned to appeal.

Pelvic mesh implants are used to treat stress urinary incontinence and pelvic organ prolapse, but the devices have come under increased scrutiny in recent years due to safety concerns. Associated Press reports that seven manufacturers, including Ethicon, are being sued over the devices. Many lawsuits are consolidated in a multidistrict litigation (MDL) centralized in the U.S. District Court for the Southern District of West Virginia before U.S. District Judge Joseph Goodwin. On March 2, Ethicon began trial for a bellwether case in this litigation, which includes some 23,000 lawsuits. Last September, Ethicon lost the first trial and was ordered to pay $3.27 million.

A number of lawsuits point out that transvaginal mesh implants were not clinically tested for safety or efficacy before they were put on the market. This is because they were approved through 510(k), which excuses the need for such testing if a manufacturer can show that their device is “substantially equivalent” to an older device.

The U.S. Food and Drug Administration (FDA) said in 2008 that the most common complications associated with mesh implants are erosion through the vagina (also called exposure, extrusion, or protrusion), pain, infection, bleeding, pain during sexual intercourse, organ perforation and urinary problems. In 2011, the agency updated this information to warn that these adverse effects are “not rare”, stating that these devices may put patients at greater risk compared to tradition non-mesh procedures for POP.