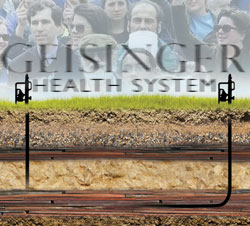 A proposed study would examine the health effects of hydraulic fracturing (fracking) drilling on the people living closest to active natural gas wells.

According to an NPR report this week, the Geisinger Health System has proposed conducting the first comprehensive study on the health effects of people living near the Marcellus shale formation, a multi-state mass of underground rock where natural gas companies and fracking drillers have converged in large numbers to extract fuel from the rock.

Geisinger covers millions of Pennsylvanians, especially in the area where fracking drilling has boomed in recent years. There are at least 5,000 active fracking wells in the Marcellus shale region, which extends from Ohio and West Virginia, through most of Pennsylvania, parts of Maryland, New York, and New Jersey. Those living within this region and near other areas in the country where fracking drilling has boomed believe the controversial method of gaining natural gas causes environmental damage and has also impacted their health in various negative ways.

If the study goes forward, Geisinger will be conducting the first comprehensive review of the effects of fracking drilling on the public health. While many believe fracking drilling and the toxins used in or produced by it have adversely affected their health, either causing breathing problems, skin reactions, or has been slowly poisoning them through contaminated drinking water, no study has firmly linked the process to these conditions and effects.

The Geisinger study would go further, according to the report, investigating whether fracking drilling is responsible for more serious health problems, such as the onset of diabetes, cancer, or other diseases.

Geisinger proposes using its vast database and large patient base – spanning at least 2 million Pennsylvanians, most of whom live in an area where fracking is actively conducted – to determine whether the maladies reported by patients have any correlation to natural gas drilling. The study proposes beginning by examining the records of asthmatics because they’re most affected by high levels of ozone, a gas created and surrounding an area where fracking is conducted.

Since most Pennsylvanians were not exposed to these levels of ozone gas 10 years ago, researchers and doctors with Geisinger believe they’ll be able to determine whether or not a spike in fracking drilling brought about these symptoms. The health system plans to use data collected by the Environmental Protection Agency to determine the days and time periods when ozone levels near fracking wells were recorded at their highest and compare that against their own vast database of patient records.

Geisinger lamented to NPR that no one has stepped forward to fund initial stages of its study, which would likely cost in the millions of dollars before it’s completed. A source from the health system said the first phase, regarding those with asthma, would cost about a million dollars.

In Pennsylvania, particularly, millions of people are at risk of suffering health and environmental damage as a result of widespread and virtually unchecked fracking drilling. As local governments look to stem a boom in drilling allowed by federal and state regulations, or a lack thereof, residents are nearly powerless against the drillers and natural gas industry. Dozens of Pennsylvanians have filed lawsuits against drillers in recent months seeking damages for the harm caused to their health and local environment, namely contamination of their private water reserves.