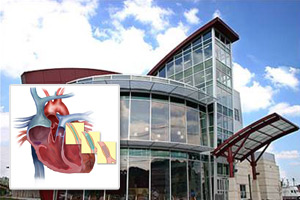 Appalachian hospital, King’s Daughters Medical Center in Ashland, which leads in the nation’s rate of coronary stenting is under federal investigation for implanting the devices needlessly, a spokesman said.

The Department of Justice has been conducting investigations into interventional cardiology and stenting since 2006; no less than 11 hospitals have settled federal allegations they billed public health programs for unnecessary stents and related issues, according to Bloomberg.com. Investigations are ongoing in five other states.

As we’ve written, the issue of cardiac stenting has highlighted potential overuse of the devices that may lead to cardiac complications. Cardiac stenting involves propping open a narrowed coronary artery with a small, metal mesh tube. During emergency surgery, for instance, when a patient is suffering a heart attack, a stent can save a life. Studies have long revealed, however, that stents are being implanted in patients who do not realize any significant benefit from stent implantation.

Another Kentucky physician, Sandesh Patil, just became the third United States cardiologist who was convicted on federal charges tied to unnecessary stent procedures, Bloomberg.com wrote. Patil was sentenced to 30 months behind bars after pleading guilty to one charge of Medicaid fraud.

Also, Dr. Paulus and King’s Daughters were named in a civil lawsuit that was filed September 30 that alleged Paulus “dramatically” misrepresented the severity of a patient’s heart disease to justify having implanted five unnecessary stents, Bloomberg.com reported. In that lawsuit, the male patient, 50, claims Paulus implanted him with a number of unnecessary stents between 2006 and late 2010 and that he now allegedly suffers from ongoing allergic reactions to the polymers used in the stent, including hives, joint pain, and throat swelling. An expert hired by the man’s attorney said the initial stent was implanted at the area of a catheter-induced arterial spasm, not a significant blockage and a second stent was implanted due to scar tissue from the first stent that blocked the same artery. The subsequent stents were unwarranted, according to the plaintiff’s attorney.

Ashland physicians conducted some type of stent procedure on 27 out of every 1,000 Medicare enrollees there in 2010, according to an analysis conducted by the Dartmouth Atlas of Health Care. The number of stents, according to Bloomberg.com, was about 3.5 times the national average.

In another case recently highlighted by Bloomberg.com, a man implanted with 21 stents over eight months suffered a ripped blood vessel and involved the surgeon placing five tubes in one artery in one procedure, according to a Texas Medical Board staff complaint. The unnecessary stents weakened the man’s heart and led to clots, blockages “and ultimately his death,” the complaint alleged.

According to Bloomberg.com, stents have been used on about 7 million Americans over the past decade. About 700,000 stent procedures are conducted nationwide each year.