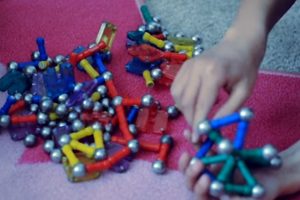 Magnet toy sets are considered by many consumer advocates to be among the most dangerous toys on the market.  The magnets in  toys like Magnetix are high-energy neodymium iron boron magnets. If a child swallows more than one of these powerful magnets, they can be attracted to each other while in the intestinal tract. As a result, the magnets clump together, causing the intestines to twist. This can cause intestinal blockages, bowel perforations and even death.

Magnetix Building Sets were subject to a large scale recall in 2006, following the death of a toddler who swallowed a magnet that had come loose from its casing. In April 2007, the CPSC expanded the recall to include all Magnetix sets sold before March 2006. By then, injury reports had reached 1,500.  Last March, Mega Brands recalled 1.1 million Magtastik and Magnetix Jr. Pre-school Magnetic Toys, and 1.3 million  MagnaMan Magnetic Toy Figures after receiving 19 reports of magnets coming loose.  One report involved a 3-year-old boy receiving medical treatment to remove a magnet from his nasal cavity and one report of an 18-month-old boy with a magnet in his mouth, which was not swallowed.

According to the CPSC,  in December of 2005, Rose Art filed an “initial report” informing the commission that a 22-month-old child from Washington state had died, due to ingesting multiple magnets that fell out of pieces from a Magnetix set. The report contained no other product or incident information and Rose Art attributed the magnets falling out to unusually abusive play by the toddler’s older siblings. On February 1, 2006, Rose Art submitted a Full Report which again lacked incident and product information. Rose Art stated that it did not retain any complaint or incident records.

After discovering documents which led CPSC staff to believe Rose Art had compiled incident information, a subpoena was issued to the firm (which had been renamed Mega Brands America and was under new ownership and control) to obtain product and incident information. The CPSC learned through the subpoena that at the time Rose Art filed its “initial report” in December 2005, it had received over 1,100 consumer complaints that magnets had fallen out of plastic pieces from dozens of different Magnetix models. Additionally, the subpoena revealed that Rose Art had received at least one report of an injury due to magnet ingestion, prior to the toddler’s death in Washington state.

By the time Rose Art agreed to the recall of Magnetix in March 2006, the firm had received more than 1,500 complaints of magnets falling out of plastic pieces in more than 65 different models of Magnetix.

Federal law requires firms to report to the CPSC immediately (within 24 hours) after obtaining information reasonably supporting the conclusion that a product contains a defect which could create a substantial product hazard, creates an unreasonable risk of serious injury or death, or violates any consumer product safety rule, or any other rule, regulation, standard, or ban enforced by the commission.

In agreeing to the settlement with the CPSC,  Mega Brands America maintains that it did not know of the Magnetix defect at the time it acquired Rose Art.  According to the company, Rose Art’s prior owners never advised Mega Brands Inc. of the problems of associated with Magnetix.