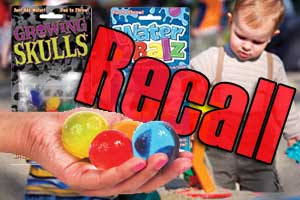 Dunecraft Recall Toys Injury Lawsuits. Our firm is investigating potential lawsuits on behalf of victims who suffered injuries by ingesting Dunecraft marble-sized toys that expand when placed in water. These toys, which grow to 400 times their size, are sold as Water Balz, Growing Skulls, H2O Orbs “Despicable Me” and Fabulous Flowers toys. In December 2012, these toys were recalled by the U.S. Consumer Product Safety Commission and Health Canada due to reports that the products may lead to intestinal blockage and potentially life-threatening injuries when ingested. If your child or someone you know suffered injuries by swallowing one of these Dunecraft toys, our attorneys would like to speak with you. Contact Parker Waichman LLP today for a free, no-obligation evaluation of your case.

Toys Recalled Due to Ingestion Hazard

Water Balz, Skulls, Orbs and Flower Toys are marble-sized toys manufactured by Dunecraft, Inc. of Cleveland, Ohio.
When placed in water, these toys expand to 400 times their original size. They were sold in packages of six in and were available in green, yellow, red, blue and black colors.

On December 17, 2012 the U.S. Consumer Product Safety Commission (CPSC) and Health Canada recalled Water Balz, Skulls, Orbs and Flower Toys due to a serious ingestion hazard. Consumers who own the toys were advised to take them away from children immediately. According to a news release by CPSC, these toys expand inside the body when ingested. This causes a blockage in the small intestine, leading to severe discomfort, vomiting and dehydration. The CPSC warned that swallowing one of these toys could be life-threatening. Once swallowed, the toys do not show up on an x-ray and require surgery to be removed. The CPSC cited one case of an 8-month old girl who suffered an intestinal obstruction in August 2011 after ingesting a Water Balz; the girl had to undergo surgery to remove the toy.

Overall, the CPSC and Health Canada recalled approximately 94,700 units in the United States and 600 in Canada. Dunecraft Water Balz, Skulls, Orbs and Flower Toys were sold in several stores nationwide, including:

The toys were also sold online for about $3 a package at amazon.com, incrediblescience.com, keyporthobbies.com, americantoystores.comand other websites between September 2010 and November 2012.