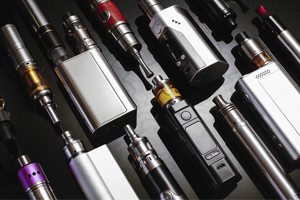 Smoking electronic cigarettes, or “vaping,” has exploded in popularity in the past couple of years. Many consumers who smoke e-cigarettes are convinced that the devices are healthier than cigarettes. E-cigarettes are pen-like devices that warm a liquid to create a vapor. The user inhales and exhales the vapor, much like a regular tobacco cigarette. Vaping has replaced smoking tobacco cigarettes for many people looking for a “safe” alternative to cigarettes.

Proponents of vaping argue that it is not as bad for the environment as smoking. Additionally, vaping enthusiasts note that the liquids come in a variety of flavors, offering a unique experience for the consumer. The liquids are available with a variety of nicotine concentrations, and some contain no nicotine at all.

However, a new study has revealed that vaping may not be as safe as people have believed and hoped. According to one recent study, published in early 2018, vaping may actually increase the risk of heart disease and certain types of cancer.

The study was published in Proceedings of the National Academy of Sciences.

The study was led by Moon-shong Tang, who teaches environmental medicine at New York University. The study was conducted on human cells, as well as mice.

The study showed that the nicotine inhaled from vaping could change into chemicals that harm the user’s DNA. The DNA in the lungs, bladder, and heart seemed to be most affected. Additionally, the body’s ability to repair itself may also be hindered.

Tang explained that the effects on DNA are much like the ones associated with secondhand smoke. He noted that more research should be done to explore any possible links between vaping and cancer.

Now, the researchers have created long-term studies to examine whether mice that are exposed to e-cigarette vapor develop tumors. Tang clarified that the studies would not reveal any evidence anytime soon. He said, “The results may take years to come in because cancer is such a slow process.”

Some researchers applauded the study. Others, however, shrugged it off. Critics of the study commented that the mice were around high levels of e-cigarette vapor and that the effects on mice may be different from its effects on humans. Peter Hajek, who leads the Tobacco Dependence Research Unit at Queen Mary University, commented, “This study shows nothing at all about the dangers of vaping. It doesn’t show that vaping causes cancer. This is one in a long line of false alarms which may be putting people off the switch from smoking to vaping which would undoubtedly be of great benefit to them. The best current estimate is that vaping poses, at worst, some 5% of risks of smoking.”

There are thousands of chemicals present in tobacco smoke. At least 70 of these chemicals have been linked to causing or driving cancer. As compared to tobacco smoke, e-cigarette vapor has a fraction of the number of chemicals. In fact, most of the smoke only has nicotine in it.

In the study, the mice were exposed to e-cigarette smoke for three-hour periods for five days a week. The study went on for three months. The vapor contained 10 milligrams of nicotine per milliliter. This is a similar concentration of the e-cigarette smoke that consumers typically inhale. However, Hajek argued that the study used “extremely large doses of nicotine.”

After three months, DNA damage was detected in the bladders, hearts, and lungs of the mice. In the control group, in which the mice breathed in the filtered air, there was no such damage. Additionally, in the experimental group, the mice’s naturally occurring DNA repair processes were reduced.

A recent report from The National Academies of Sciences, Engineering, and Medicine noted that making the switch to e-cigarettes may help smokers kick the habit for good. Additionally, the report noted that vaping is probably not as harmful as tobacco cigarettes.

A representative from Cancer Research UK, Jasmine Just, commented, “The evidence so far shows that e-cigarettes are far less harmful than smoking. Research like this is important, but this lab study only looked at the effects of e-cigarette smoke on cells and on mice, which means it’s not possible to draw any conclusions from this about how e-cigarettes might affect people in real life. Up to two-thirds of long-term smokers will die because of their addiction, but e-cigarettes don’t contain tobacco. Instead, they contain nicotine, which is what keeps people addicted, but is not responsible for the major health harms of smoking. Research in people has shown that those who make a complete switch from smoking tobacco to e-cigarettes can significantly reduce their exposure to key harmful chemicals in tobacco smoke.”

The most troubling aspect of the potential link between e-cigarettes and cancer is the number of minors and young adults who are becoming frequent users.

The U.S. Food and Drug Administration (FDA), in partnership with the Center for Disease Control (CDC), has published a study released by the National Youth Tobacco Survey (NYTS) to show that youth use of e-cigarettes has increased exponentially.

In this study, 3.6 million middle and high school students admitted to having used E-cigarettes in the past 30 days. That is an increase of more than 40% or over 1.5 million youth users.

The FDA also reported that more than 20% of high schoolers and nearly 5% of middle schoolers are current users of E-cigarettes. Though the explosion of e-cigarettes has undone years of anti-tobacco messaging, it has also potentially exposed millions of teens and young adults to the risk of cancer from long-term e-cigarette addiction.

E-Cigarette Use Has Been Linked To Health Complications Including Seizures

Recently, the FDA released a statement describing the potential risk of e-cigarettes as they relate to seizures. Although it is too early for studies to find direct, scientific proof, the FDA has seen numerous user reports from 2010 to 2019 about seizures occurring as a result of e-cigarette use. As of August 7, 2019, the FDA is investigating at least 127 cases of seizures related to vaping. For the full story, see Parker Waichman’s coverage of it here.

Additional complications and health problems related to e-cigarette use have also been reported to the FDA for review. Many of these user reports include accounts of respiratory infection or chronic illness. For information related to E-Cigarettes and respiratory illnesses such as Wet Lung, see Parker Waichman’s in-depth coverage here.

While diseases and health risks are a significant force to contend with, e-cigarettes also carry with them a serious risk of physical harm. Many e-cigarettes have a chance to overheat and detonate without warning, causing burns and other serious injuries. For information related to E-Cigarette injuries occurring from Exploding Vapes, check out Parker Waichman’s Exploding Vape Page here.

What if e-cigarettes are proven to cause cancer or heart disease?

Product manufacturers can be held strictly liable if their products cause injuries to consumers, even if they did not intend for their products to cause harm. These types of claims are called products liability lawsuits.

In a products liability lawsuit, a consumer alleges that a defect in a product has caused an injury.

There are three types of defects:

There are a number of damages that may be available in a products liability claim, depending on the consumer’s injuries and the manufacturer’s conduct. These may include:

Of course, additional damages may also be available, depending on the nature of the claim.

Products liability attorneys are experienced in these claims and understand how to present evidence so that maximum compensation is obtained. If a vaping device or e-cigarette has injured you, it is best to meet with a vape heart disease or death lawsuit attorney as soon as possible to discuss your legal options.

At Parker Waichman LLP, we are not afraid of big manufacturers and distributors. We fight for you so that you obtain the money you deserve. To schedule your free consultation with our experienced products liability attorneys, call 1-800-YOURLAWYER (1-800-968-7529).

Have you or a loved one been harmed due to smoking e-cigs?