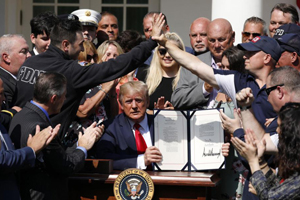 Victims of the 9/11 terrorist attacks have been suffering for nearly 20 years following a horrific experience that they will never forget. Shortly after the 9/11 attacks, Congress established the Victim Compensation Fund (VCF) through the Zadroga Act, which was created to provide compensation to families of deceased victims as well as injured and ill individuals.  Some victims were in the twin towers at the time of the attacks, and many others were first responders, such as firemen and police officers. While the fund has been helpful for so many victims, money is running out, leaving tens of thousands of victims with little hope of receiving much-needed compensation in the future.

Between 2001 and 2004, the Victim Compensation Fund paid approximately $7 billion in claims to compensate the families of more than 2,800 deceased victims and approximately 2,600 injured individuals.  Congress extended the fund in 2011 and reauthorized the fund for an additional 5 years in 2015.  From 2016 to 2018, nearly 20,000 victims filed claims to receive compensation, demonstrating that many victims have delayed illnesses that manifest decades after exposure to toxic substances.  Exposure to many toxic substances has resulted in victims suffering from severe illnesses, including cancer.  For example, many victims who were exposed to asbestos have developed mesothelioma, rare cancer that has been linked to asbestos for decades.

Because money is running out to help the victims of 9/11 and the fund is set to expire in December of 2020, Congress recently passed a bill that would extend the Victim Compensation Fund to 2090, providing whatever amount of money is necessary to handle all claims.  Both the House of Representatives and the Senate overwhelmingly passed the legislation, and the President is expected to sign the bill into law.  The lawmakers that opposed the legislation wanted to offset the cost of paying 9/11 victim claims by cutting spending in other areas.  However, these lawmakers were heavily outnumbered, paving the way for victims to receive benefits for the rest of their lives.

Well-known comedian, actor and activist John Stewart, along with 9/11 first responders, testified before Congress demanding that the Zadroga Act’s Victim Compensation Fund continue to help the tens of thousands of victims which will continue to suffer for the rest of their lives.  The bill extending the fund to 2090 provided what John Stewart and first responders have been asking for – unlimited resources to help compensate victims of 9/11 with no expiration date for 70 years.