When two aircraft hit the World Trade Center’s north and south towers on September 11, 2001, more than 2,700 people were killed. It has been called the most infamous terror attack in modern history. The death toll as a result of the toxic dust that covered New York City when the Twin Towers collapsed, could reach into the millions.

Area residents have already begun to develop cancers stemming from the asbestos-filled ash, and a leading health expert has warned it will only get worse. “In 15 to 20 years we are going to see a serious health issue here in New York. We haven’t even seen the tip of this iceberg yet,” Dr. Raja Flores, Chief of Thoracic Surgery at Mount Sinai Hospital in New York told nine.com.au.

“There’s almost nine million people in New York… a lot more people may have been exposed (to asbestos fibers) than we first thought. It contaminated a huge portion of the city and that entire population was exposed,” said Dr. Flores.

The numbers of those who lost their lives included those who died when another plane hit the Pentagon, and a hijacked plane crashed into a field near Shanksville, Pennsylvania. But the true magnitude of the attack may only start to be understood regarding the dust and debris that scattered across Lower Manhattan and surrounding areas.

Parker Waichman is a national law firm that has spent many years fighting to ensure that the heroes and survivors of the 9/11 terrorist attacks are never forgotten. The firm is committed to helping anyone seeking legal information concerning a potential lawsuit.

Hidden in the Dust

Concealed in the dust was more than 400,000 kilograms of asbestos, mercury, fiberglass, and benzene and was inhaled in different amounts by countless people. Firefighter Ray Pfeifer, was one of many first responders who worked more than eight months cleaning up the wreckage. He died recently from brain and lung cancer that was linked to his work at Ground Zero.

Dr. Flores, considered one of the world’s leading experts in pleural mesothelioma and asbestosis, said, although lower Manhattan got most of the dust, anyone in the city at the time and days that followed the attack were potentially exposed to deadly asbestos fibers. “There are a lot of people now who are having respiratory issues and we are starting to see more cancers,” he said.

“People are already getting sick from the asbestos and they have died from it. I think you will probably see double or tripling of the number of lung cancers in people who were in New York City on 9/11 and mesothelioma and people dying of pleural fibrosis from asbestosis,” notes Dr. Flores.

Dr. Flores disagreed with reports that only first responders and people in the vicinity of the World Trade Center were at risk for lung cancer, warning the United States may be a few years away from a catastrophic national health crisis, nine.com.au reports.

Originally, the construction of the WTC plans included over five million kilograms of asbestos to be used in the Towers. The controversial construction was stopped in the 1970s once a link was proven between asbestos fiber exposure and lung cancer by Dr. Irving Selikoff from Mt. Sinai Hospital. However, almost half a million kilograms of the hazardous insulation had already been sprayed in the first 40 stories of the buildings, according to nine.com.au.

“It’s one of the most dangerous substances around. Every day I operate (I see) patients that have been affected by asbestosis. The safe amount of asbestos in the air for someone to inhale is zero. There’s no safe amount,” said Dr. Flores.

Dr. Flores’ grim projection for the people of New York stems from a comparative study he made in Libby, Montana, where the asbestos used in the WTC was initially mined and manufactured. His study examined the contaminated vermiculite mines in the region and the local population’s exposure to tremolite asbestos. Over 400 people in the town of 2,656 have died from asbestos-related illnesses since the 1990s. “It’s common sense that what happened in Libby will start happening to the people in New York. That’s frightening and it’s a big deal,” he said. 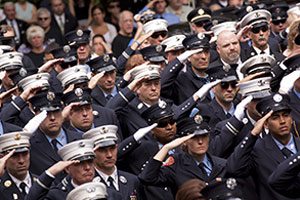 In 2010, former president Barack Obama signed the Zadroga Act into law to provide free medical treatment and compensation to first responders at Ground Zero. Although the Zadroga Act provides invaluable medical assistance to thousands of emergency personnel and law enforcement, it does not cover the rest of the city’s general population, who according to Dr. Flores have already started to develop asbestosis and lung cancers. He said an immediate change to the Zadroga Act is needed to cope with the still-developing aftermath of 9/11.

The September 11th Victim Compensation Fund (VCF) was created in 2001 to give compensation to anyone killed or injured in the attack or during the subsequent lengthy clean up. The program covers pulmonary diseases and 58 types of cancers. It expired in 2004, but was extended until 2020 by Obama. It has already paid out over $9.4 billion in exchange for a legal agreement that victims will not sue the airlines for negligence, reports nine.com.au.

If you or someone you know has been experiencing health issues related to 9/11, you may have valuable legal rights. The personal injury attorneys at Parker Waichman LLP offer free, no-obligation case evaluations. We urge you to contact us at 1-800-YOURLAWYER (1-800-968-7529).