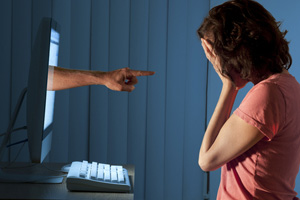 Bullying used to be confined to school or other areas where students gathered in person, but the invention of cell phones and the Internet have made it easier for bullying to happen at all hours of the day and in any location. Cyberbullying can take place on any device linked to the Internet, including gaming consoles, computers, tablets, and cell phones. It occurs over social media, in texts, via apps, during gaming sessions, and in online forums. Cyberbullying can even cross the line into criminal behavior. It can consist of sharing naked pictures of someone without their permission, sending threats, spreading lies or rumors about the person, or stalking, either in person or online.

The content you share online forms a public record of your ideas, activities, behavior, and interactions that often stays there forever. Teachers, college admissions officers, parents, future employers, and friends can all access this record, and this online history can have a real-life impact on how you’re viewed. When cyberbullies post things about you that you don’t want the world to see, it can cause real harm to your reputation.

Cyberbullying has issues that set it apart from other types of bullying behavior. First, because of the 24-hour nature of cell phones and social media, the bullying can be incredibly persistent, and people experiencing cyberbullying struggle to find relief from the onslaught. It also leaves a permanent record in ways other types of bullying do not. And it can be hard for adults to notice because the bullying takes place in text messages or on social media platforms where adults may not see it.

According to the National Center for Education Statistics, out of all students aged 12-18 who reported suffering incidents of bullying, 15% were bullied via text message or online. A 2017 study from the Centers for Disease Control and Prevention estimated that 14.9% of all high school students experienced cyberbullying in the year preceding their survey.

Some existing laws apply to cyberbullying behaviors. For instance, all states have criminal statutes about stalking and harassment. Before the mid-2000s, no laws specifically addressed cyberbullying, but a few high-profile cyberbullying cases that ended up in the news after the victims died by suicide changed that. Now, most state laws specifically mention stalking and harassment over electronic media. Schools are also allowed to take action. Nearly every state requires schools to have a formal policy in place to identify bullying and a clear plan for disciplinary actions when bullying is discovered. According to federal law, schools are allowed to discipline students for off-campus behavior that impacts the school environment. Additionally, victims can sue their harassers in civil court.

It’s important to remember that while most states do have some laws on the books about cyberbullying, each state’s laws are different. The penalties for breaking anti-bullying laws vary widely from state to state. Depending on the state and applicable cyberbullying laws, penalties can range from a school intervention, like suspension or expulsion, to jail time. For instance, California’s Safe Place to Learn Act provides for a fine and up to a year in prison for people who use electronic devices in a way that makes someone fear for their life. Meanwhile, Missouri’s anti-bullying statute allows for the harasser to be charged with a class A misdemeanor unless the victim is under 17, at which point it becomes a class D felony.