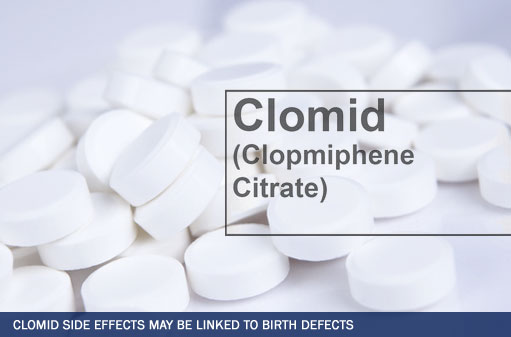 Clomid Side Effects Can Cause Birth Defects. A study of Clomid (clomiphene-citrate) conducted by the Centers for Disease Control and Prevention (CDC) links the drug, Clomid, to significantly increased risks for numerous, serious birth defects, including cleft lip and palate. The CDC study involved women who reported use of the ovulation medication, Clomid, in the two months before conception and during the first month of pregnancy. Birth defects associated with Clomid are serious, and some are life threatening. The terrible irony is that the very fertility treatment prescribed to help women conceive may lead to their babies being born with seriously crippling and, in some cases, life-threatening birth defects.

The birth defect attorneys at Parker Waichman LLP are investigating potential lawsuits on behalf of children and their parents in cases in which the expectant mother was prescribed the fertility drug, Clomid, and the baby was born with, or suffers from, any of the adverse reactions indicated in the complete list of birth defects below. If your child was born with any of these birth defects and you believe that your use of Clomid may be to blame, we urge you to contact the attorneys at Parker Waichman LLP, who are experienced in defective drug and birth injury litigation. Please contact us at 1-800-YOURLAWYER (1-800-968-7529) today.

Clomid received approval from the U.S. Food and Drug Administration (FDA) in 1967 to assist women suffering from infertility issues to conceive. Clomid is the most commonly prescribed fertility drug and is in a class of drugs called ovulatory stimulants. Clomid functions by inducing ovulation (egg production) in women who are unable to produce eggs. When used by women, Clomid works similarly to estrogen, a female hormone that causes eggs to develop in the ovaries and to be released. Clomid is available as a tablet that is usually taken once a day for five days, beginning on or about day five of the woman’s menstrual cycle.

The FDA indicates that, in order to avoid inadvertent Clomid administration during early pregnancy, appropriate tests should be utilized during each treatment cycle to determine whether ovulation occurs. The patient should be evaluated carefully to exclude pregnancy, ovarian enlargement, or ovarian cyst formation between each treatment cycle. The next course of Clomid therapy should be delayed until these conditions have been excluded.

Clomid is also sometimes used to treat male infertility, and is typically prescribed to treat low testosterone production. Clomid restores the body’s ability to naturally produce testosterone and is often prescribed due to its low cost when compared to testosterone injections. The FDA has not approved Clomid for this off-label use.

When medications are considered too dangerous to administer to humans in the testing environment, testing is conducted on animals. When evidence of adverse side effects are seen in the animal testing environment, it is generally assumed that, if a birth defect is present in animals exposed to a medication, the same defect will occur in humans who are similarly exposed.

Animal studies suggest that higher doses of Clomid given to pregnant rats resulted in dead fetuses, and difficult or delayed childbirth for the mothers. The highest dosages caused maternal mortality, fetal cataracts, and fetal cleft palate.

Animal testing has also revealed evidence of fetotoxicity (injury to the fetus) in babies whose mother’s were exposed to Clomid prior to conception and during development. Post marketing surveillance has supported these results in human data. The FDA recommends women who are, or could be, pregnant should not take this drug.

A variety of animal studies have also revealed a broad array of abnormalities that intensify with stronger Clomid doses. Research also found that Clomid is also associated with low implantation rates and low fetal weight, as well as high rates of fetal death. High rates of exencephaly were also seen.

Until now, research examining the association between the fertility drug, Clomid, and birth defects has been inconclusive; however, a November 2010, the journal Human Reproductionpublished a study from the CDC that revealed a significant association with nine types of birth defects following the use of Clomid. The study utilized data from the National Birth Defects Prevention Study, a population-based, multi-site case control study of major birth defects. Women from 10 U.S. regions with deliveries affected by at least one of 30 birth defects and mothers of live born infants without a major birth defect (controls) who delivered from October 1997 through December 2005 were interviewed. Clomid medication use was reported by 1.4 percent of women in the study. Thirty-six birth defect categories with at least three exposed cases were studied. The implicated abnormalities included anencephaly, esophageal atresia, omphalocele, craniosynostosis, septal heart defects, muscular ventricular septal defect, coarctation of aorta, Dandy Walker Malformation Syndrome, and cloacal exstrophy.Twenty-two of the remaining 27 birth defect categories likewise showed an increased risk, ranging from10 percent to 170 percentfollowing Clomid exposure, although the study authors indicated that the numbers were insufficient to reach the scientific standard for statistical significance.

A 1991 review of scientific literature revealed that women who became pregnant following Clomid treatment experienced a spontaneous abortion rate of 16-22 percent (one in five pregnancies). Other research suggests Clomid is tied to a 1 percent stillbirth rate.

Other studies have also pointed to an association between Clomid for infertility and birth defects. For example, one study of 2,339 Clomid-assisted pregnancies found 58 reported cases of Clomid birth defects and reproductive complications, including spontaneous abortion and stillbirth.

The findings of these studies and resulting statistics may be extremely devastating to the women and their families who had struggled to become pregnant, and have finally given birth only to find that the fertility drug they were given caused their baby to suffer from a severe or deadly birth defect.

Research has identified the following as serious birth (congential) defects:

*The most common birth defects reported in Clomid clinical trials.

** The most common birth defects reported in post-market surveillance.

Our Clomid side effect lawyers are here to help you when you need it the most.